Hyderabad: Mission Bhagiratha, the novel initiative taken up by the TRS government to supply safe drinking water to all the households in the State, has brought cheer to the people living not only in rural Telangana but also in semi-urban areas.

According to official sources, in the case of 61 urban local bodies (ULBS) in the State, service connections were given to 8,08,370 households, including 5,78,314 existing connections, and the government proposed to cover another 7,38,158 households under the scheme.

The project, comprising 26 segments in 32 districts, sources water from major rivers and reservoirs and purifies it in nearby water treatment plants. The water then is pumped to major overhead water storage reservoirs (OHSR) and sumps at the highest points. From there, the water is supplied through the secondary pipeline network to all the habitations by gravity. The aim is to distribute drinking water to every household in the State through a modernised and rationalised intra-village network by providing tap connections.

The project caught the attention of not only the governments in other States but also the Centre. Several States, including Bihar, Karnataka and Maharashtra, have already started replicating the programme, while the Centre announced a similar scheme to provide safe drinking to people across the nation. NITI Aayog, appreciating the novel initiative of the TRS government, had recommended the Central funding for the project. The Prime Minister made it a point to make a special mention of the scheme in one of his ‘Mann ki Baat’ sessions. The State government has won the HUDCO award thrice for best outstanding contribution in the infrastructure sector through innovative initiatives.

No more spending on RO water in Suryapet

Suryapet: Residents of Suryapet town have at last begun to get potable drinking water at their doorsteps.

This town with a population of 1.15 lakh was till now supplied with water drawn from the Musi river, treated and then supplied. However, people had doubts about the quality of water and were forced to purchase water from Reverse Osmosis (RO) plants which sprung up all over the town. Each family used to spend around Rs 400 to Rs 600 a month on buying water from them.

It might not be an exaggeration to say that more than 90 per cent of the families relied on RO water. According to rough estimates, the private RO plants in Suryapet were making a business of Rs 1 crore a month. 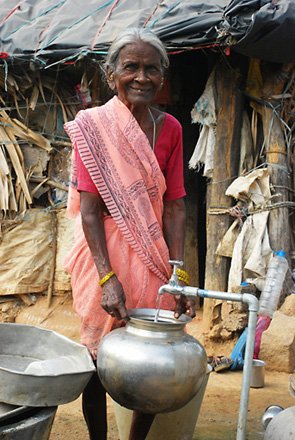 But not anymore. The dream of getting potable water at doorsteps was fulfilled with the launch of Mission Bhagiratha. Apart from saving the money of residents, the confidence and satisfaction that safe drinking water is being supplied to them is unquantifiable. Suryapet municipal officials say that about 125 liters per person is being supplied in the town every day.

From Imampet grid of Mission Bhagiratha, safe drinking water is being supplied to 860 habitations, including Suryapet, Kodad, Huzurnagar and Tirumalgiri municipalities in the district.

Executive Engineer (Grid), Mission Bhagiratha, M Venkateshwarlu said special measures were taken up for treating the water at the Imampet grid. Through the grid, safe water was being supplied to 860 habitations (gram panchayats and hamlets) in the district and the remaining 54 habitations would also be covered soon. While the capacity of the grid was 95 MLD (Million litres per day), we are supplying 80MLD of water to the habitations every day, he said.

“We have stopped purchasing RO water from private plants after Mission Bhagiratha’s launch. The water being supplied now is as pure as the RO water ”

“We are getting sufficient water from the last six months. When water was sourced from the Musi, we faced some health problems. But now, the problem is solved with the supply of safe drinking water ”

An end to water woes, water-borne diseases in Karimnagar

Karimnagar: After the launch of Mission Bhagiratha, people could now drink potable water and be free from water-borne diseases. Hitherto, people used to spend a lot of time in fetching water from distant places, but with the government’s initiative, the water is supplied to every household through taps. In effect, Mission Bhagiratha has put an end to the drinking water woes.

Under the scheme, the water is being supplied to 490 habitations in the district. Superintendent Engineer Ch Amarendra said they had a prepared plan to provide water to 494 habitations under three segments. Of that, 490 villages were getting water now.

“Earlier, we used to fetch water from LMD Colony. Now, we got a connection at home under Mission Bhagiratha and safe water being supplied. We thank Chief Minister K Chandrashekhar Rao for taking up the project

“We used to depend on a borewell before. Now, we stopped drinking such untreated water after we got taps at home. People suffered from knee pains when they drank bore or bottled water”

“We used to face severe scarcity in summer. Mission Bhagiratha has solved all our water troubles. We thank local MLA and Minister KT Rama Rao for completing the scheme on a fast-track mode”

Khammam: The Mission Bhagiratha works are going on at a brisk pace in erstwhile Khammam. So far, 2,73,255 tap connections were given and 2,165 km of the pipeline was laid. Nearly 564 overhead tanks were constructed under intra-village works in Khammam district where the process of stabilisation was completed in 67 villages.

In Khammam, works were divided into two segments — Palair and Wyra. In Palair, water is being supplied to 370 habitations every day and in Wyra 397 segments. The works related to intake well, water treatment plant, sumps, ground-level and overhead balancing reservoirs have been completed in Khammam district.

In Bhadradri Kothagudem, nearly 50 per cent habitations were getting water daily. Bhagiratha works in 64 villages, of the 1,516 habitations, is 100 per cent complete in all respects. The works in other habitations are going on at a brisk pace. Of the 761 sanctioned overhead tanks, nearly 560 were built all over the district and as many as 700 old ones were streamlined, RWS EE (FAC) P Arjun Rao told ‘Telangana Today’.

He said awareness programmes on Mission Bhagiratha water were being conducted at some villages as the residents were apprehensive about the quality.

Warangal: Thanks to the State government’s initiative in implementing the flagship project Mission Bhagiratha, almost every village in the erstwhile Warangal district are getting potable water every day.

To ensure safe and sustainable piped drinking water to all households from surface water sources, the State government has been implementing the Mission Bhagiratha.

In the past, the villagers used to drink water supplied from open wells and bore wells. During summer, as these wells in some rural areas used to dry up and to mitigate this situation, hiring of private sources, supply through the tankers and deepening of the wells / borewells works were used to be taken up. But now, people are now happy that they are getting treated surface water every day.

Since 2018, Mission Bhagiratha water started supplying to rural areas and the people are able to drink safe water which has been treated in main segments and supplied in the Warangal Urban district. While there are 205 habitations in seven mandals in the Warangal Urban district, all of them are getting water daily under the scheme. In Warangal Rural district, 790 habitations in 16 mandals with a population of 6,36,688 are getting water though the pipes under the MB scheme.

In Jayashankar Bhupalpally district, all the 410 habitations with a population of 3,53,825 are getting the tap water under the water grid while 502 habitations with a population of 3,02,132 in Mulugu district are able to quench their thirst with the implementation of the mammoth water project. Not only these districts, but also majority of villages /habitations in Mahabubabad and Jangaon districts carved out of the erstwhile Warangal district are also able to get the results of Mission Bhagiratha scheme.

“We used to drink borewell water or from open wells in the village. But, now, we are getting potable water from Godavari under the Mission Bhagiratha scheme. There are no health risks as people are getting treated water” —

“We are thankful to CM K Chandrashekhar Rao for introducing Mission Bhagiratha scheme in the State. It is a great initiative”.

Kamareddy: Mission Bhagiratha has come as a boon for the people of Kamareddy, which is a drought-prone area. The district has a pipeline network of 2,123.23 km, covering 827 habitations, while 2,49,508 tap connections were issued.

In Kamareddy district, the works are divided into two segments. The first one is based on the Singuru project and the second on Sri Ram Sagar project. The first segment covers 516 habitations of Banswada, Jukkal and Yellareddy constituencies and involves an expenditure of Rs 172.33 crore. The second segment ensures water to 544 habitations of Kamareddy and Yellareddy constituencies and works were taken up with Rs 134.85 crore. In all, 827 habitations are covered by planning to construct 600 OHSRs, of which 595 are completed and 561 commissioned. 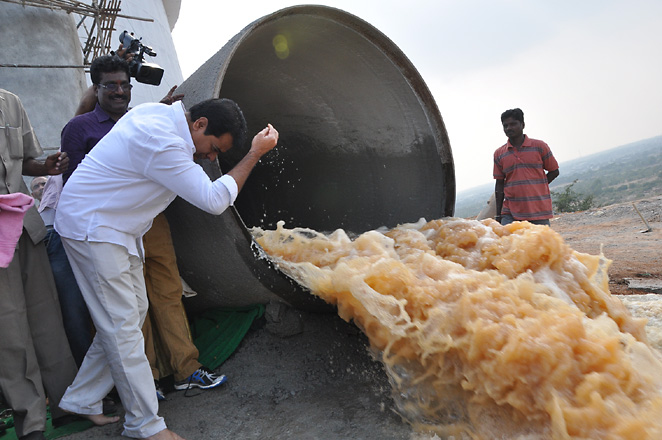 Rajendra Prasad, SE, Mission Bhagiratha, said work on laying pipeline was almost completed in all the 827 habitations. Of the 2,123.23 km of pipeline to be laid, work on 2,112 km is completed. Of the targeted 2,49,508 tap connections, some 2,40,434 were given and the rest would be issued shortly. The remaining work on pipeline and taps will be completed by March 2020.