Hyderabad: Chief Minister K Chandrashekhar Rao who has named barrages and pump houses after the presiding deities of temples in the vicinity of those structures, has named two more reservoirs in Nirmal district under the multistage Kaleshwaram Lift Irrigation Scheme (KLIS) as Lakshmi Narasimha Swamy and Sharada. He will formally announce the naming of the reservoirs shortly.

The Chief Minister who has set his mind to complete Sri Ram Sagar Project (SRSP) based packages at the earliest has directed the officials to name Package 27 reservoir which was so far known as “Talwa”, to Lakshminarasimha Swamy Sagar and the reservoir being built under Package 28 near Basara as Sharada reservoir. “The initial idea was to name the lift as Saraswathi, but as Siripuram and Annaram were already named after the goddess, the Chief Minister suggested the name of Sharada, the goddess at Basara,” a senior irrigation expert told Telangana Today.

Continuing the momentum after the successful release of water into Kondapochamma Sagar reservoir with the help of two pumps, Chief Minister directed the Kaleshwaram Lift Irrigation Scheme (KLIS) team of engineers and irrigation experts to submit a wishlist for speedy completion of works under packages 15 and 16 beyond Kondapochamma and packages 27 and 28. The experts will be submitting a report to the Chief Minister in a day or two.

The works under link VII of the KLIS include SRSP to Bhumpalli Cheruvu (Package 20,21 and 22) , SRSP to Dilawarpur of Nirmal district (package 27), SRSP to Hangara of Mudhole constituency (package 28) . Link VII constitutes a total of 7 reservoirs, 5 pump houses , 246.83 km long canals and 36.78 km length of tunnels. This part of the KLIS is envisaged to provide irrigation to 5,90,000 acres of ayacut. 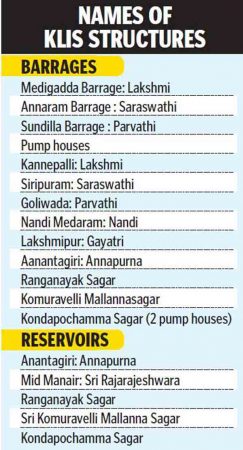 “The two pumps that were turned on at Markook pump house were briefly shut down on Friday night, the testing of other pumps has begun on Saturday. “So far the two pumps have discharged 0.3 TMC of water into the Kondapochamma Sagar as anticipated. The wet run has been successful. We will be starting once again with one pump and continue with the tests. The aim is not to fill the reservoir but to test the pumps,” KLIS Engineer in Chief (Hyderabad) Bhukya Hariram said.

As the works on link IV are nearing completion, the engineers are now concentrating on Mallanna Sagar-Yadadri under Link V, taking KLIS water to Gandhamalla and Baswapur (packages 15 and 16). While Gandhamalla reservoir has pending issues of land acquisition, the Chief Minister has directed the speedy completion of Baswapur reservoir which has a capacity 11.39 TMC water.

“The completion of Baswapur canal, which is one of the largest will be the main stay in Yadadri as the series of Lifts stops with Kondapochamma and the water is then sent through a network of canals,” a senior engineer said. Engineers are working on completion of the Baswapur reservoir located in Baswapur village of Bhongiri mandal of Yadadri so that the Godavari water can be taken to Yadadri the abode of Lakshmi Narasimha Swamy reaching another milestone in the history of KLIS.