Hyderabad: Krishna River management Board (KRMB) Chairman A Paramesham on Thursday directed the Andhra Pradesh government to submit the Detailed Project Report (DPR) of the new project aimed at lifting 3 TMC of water per day from Srisailam reservoir for appraisal and technical clearance by the Board, the Central Water Commission and the Apex Council, before moving any further on the project.

A decision in this regard was taken at the six hour long 12th meeting of the KRMB at the Board’s office at Jalasoudha here in which Telangana Principal Secretary (Irrigation) Rajat Kumar, AP Irrigation Special Chief Secretary Adityanath Das, Engineers-in-Chief C Muralidhar of Telangana and C Narayan Reddy of AP and other engineers participated.

Addressing the media after the meeting, Paramesham said that after listening to both the sides, the Board directed the two States to submit DPRs of all the new projects they want to undertake on Krishna river so that they can be appraised. “The representatives of both the States have agreed but said that they will have to take the approval of the respective State governments,” Paramesham said. 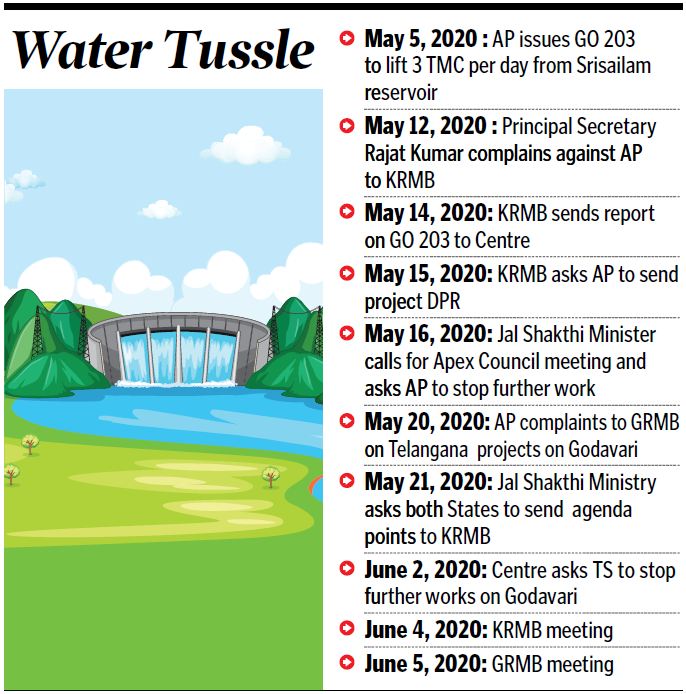 On the issue of sharing Krishna water, the board decided to continue with the system of 66:34 ratio between AP and Telangana during the current water year till the finalisation of decision regarding minor irrigation and diversion of Godavari water. “The States also agreed to the importance of measuring water used with the help of telemetry machines under phase II,” he said. Similarly, the Telugu States also agreed to share power from Srisailam Hydro electric project in the ratio of 50:50 during the current water year.

Regarding exemption of utilisations made by the States during the flooding period, when all the dams are surplus, it was agreed that the surplus water of last water year (2019-20) would be shared equally till finalisation of the issue by the committee constituted for that purpose. Regarding accounting of losses in Nagarjuna Sagar Left Canal between the States, it was decided that the existing committee will make field observations during the current water year also before taking a decision.

On the issue of accounting for only 20 per cent of drawals made towards domestic water supply as consumptive use, the KRMB agreed to refer the matter to the CWC for a decision. “Regarding the use of carry-over part of the water share of Telangana in Srisailam and Nagarjuna Sagar, the contention of the Telangana government is to account it as a part of allocation in the previous water year. The matter will be discussed after getting the views of AP,” he said.

Paramesham said that the issue of diversion of Godavari water to Krishna basin by AP and the sharing of waters so diverted has been referred to the Ministry of Jal Shakthi and the view of the Ministry was waited. On the issue of shifting of KRMB headquarters to Andhra Pradesh, Paramesham said the final decision will be taken by the Jal Shakthi Ministry. “Initially, there was some confusion with regard to State capital of AP. Now we are told that the KRMB headquarters can be shifted to Vijayawada. However it is up to the AP government where they want the KRMB headquarters,” he said.

Earlier, Telangana effectively opposed the moves by AP to lift water from Srisailam that would drastically impact the drinking and irrigation potential of the State at the KRMB meeting.

Speaking to the media, Rajat Kumar said that Telangana presented its objections in a Power Point presentation to the Board, giving details of allocations and the ongoing projects of the State and also the projects undertaken by the neighbouring State after bifurcation of united Andhra Pradesh.

“We have urged the Board to summon Apex Council as the proposed lifting of water from Srisailam has been taken after the bifurcation of the State, whereas Telangana is continuing with the projects that have all the approvals during the time of combined AP,” he pointed out.

He argued that AP had undertaken Polavaram and Pattiseema lift irrigation scheme to divert water from Godavari to Krishna. “Hence , Telangana must be compensated to the extent of Godavari water that the State has diverted to Krishna,” he told the Board. He said that 16.5 percent of the water allocated to Telangana is meant for drinking purposes.

On the other hand, Adityanath said the redesigning of projects by Telangana had hurt the interests of the State and stuck to its line of argument that Telangana has no permission whatsoever to build Palamuru-Ranga Reddy and Dindi projects since they were undertaken after bifurcation. He said the residual State will only take water from Srisailam when water levels reach 800 meters giving equal chance to both the States.

The 12th meeting of the KRMB was necessitated after the AP government issued GO 203 giving administrative sanction to lift 3 TMC of Krishna water from Srisailam reservoir via Pothireddypadu. Following the strong opposition from the Telangana government , Union Jal Shakthi Minister Gajendra Singh Shekhavat directed the KRMB to convene a meeting with the stakeholders and also suggested an Apex Council meeting with him at the earliest. The Chief Ministers of both the sibling States are also members of the Council.

While the KRMB has shot letters to the two States asking them to submit the DPRs of the proposed projects on Krishna River, the AP government argued that the GO is only about upgradation of the existing Pothireddypadu and it would furnish DPRs only after Telangana submits DPRs for five new projects that it had allegedly taken up. On the Other hand. Telangana submitted that it had not taken up any new projects and that all of the projects were taken up by the erstwhile combined AP State after obtaining all necessary clearances.