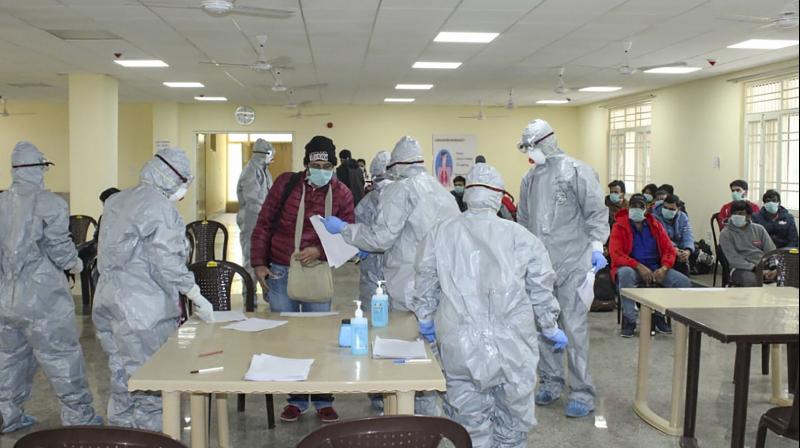 Hyderabad: Andhra Pradesh crossed the milestone of conducting 10-lakh COVID-19 tests on Sunday morning, but Telangana is lagging way behind on that count. Against 10,17,123 tests conducted in AP, Telangana has racked up a total of 1,15,835 tests as of Sunday evening.

Incidentally, with the ongoing back-and-forth between private testing labs and the state government in Telangana, the number of tests conducted in the state fell to 5,290 on Sunday from 6,427 on Saturday.

Though the health department has announced that it is going to add to its testing capacity and ramp it up to about 10,000 a day and begin antibody testing, the state government’s avowed policy of not testing anyone without symptoms, including primary contacts of confirmed Covid-19 cases for long, has been the primary reason for the low test numbers in the state.

Also, the government, more than once in press meets, has said that mere testing would not serve any purpose and explained the logic behind its decision.

According to this explanation, if someone tested negative,  it does not mean that the person will not turn positive if exposed to the virus and that the test could merely have taken place at a time when the virus was still in the incubation stage and the viral load was not enough to demonstrate the presence of the coronavirus.

The government had also said many times that there is always the possibility of anyone testing negative would feel safe, get themselves exposed due to carelessness, get infected and possibly turn positive for Covid-19 in the event such a person does get tested.

Further, the government has maintained that 80 per cent of infected people will never show symptoms or feel the infection and do not require testing. This means that widespread testing is not required in the first place, even among primary contacts of confirmed cases.

The government has maintained that it would rather focus only on those 20 per cent of so of the population developing symptoms, and test only those who really need it.

Though many senior medical professionals have been crying hoarse that the government must ramp up testing, not to mention the repeated raps the government has received from the Telangana High Court on this issue, the state has for long resisted pressure to increase its testing rate. It has only recently started releasing daily and cumulative testing numbers after the last time the High Court came down heavily on it for keeping these numbers secret from the public.