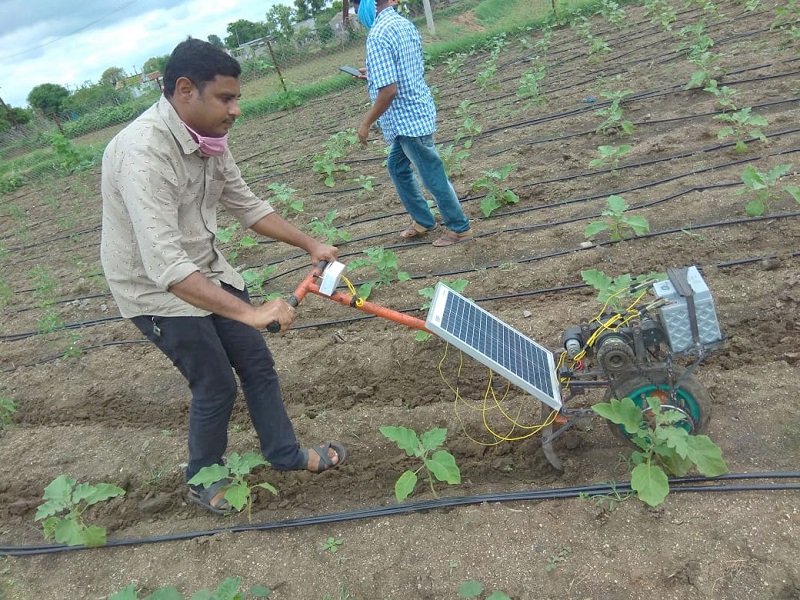 Anugu Srikanth Reddy demonstrates the functioning of Bharat Visthar Weeder, in his agriculture field at Rendlaguda village in Jannaram mandal on Sunday

Mancherial: Removing weed can be an uphill task and also an expensive affair for the agrarian community. It often forces them to explore alternatives including use of hazardous chemicals, risking their lives and health. Anugu Srikanth Reddy, a private school owner from Jannaram mandal, has invented an affordable solar weed removing device that could help farmers in a big way.

“Due to labour shortage and growing expenses for weeding in cotton and other crops, I invented the device which I have named Bharat Visthar Weeder. I built it at a cost of just Rs 4,000 that would otherwise cost around Rs 12,000 in the market. I am planning to release it in the market soon with many farmers showing interest to buy it,” Srikanth told Telangana Today.

An MSc (Computer Science) and Bachelor of Education graduate, he ventured into organic farming in his two acre agriculture field since his school was closed due to the lockdown for the past four months. He is growing various vegetable crops without using toxic pesticides and fertilisers. He, however, was struggling to find labourers and bear expenses incurred for clearing the weed in the crops.

“Not just me, but farmers in general would find it difficult in engaging agriculture laborers to remove the weed. They are depending daily earners migrating to the district from neighboring Maharashtra and Chattisgarh. They are investing a major chunk of budget earmarked for cultivating a crop. It has been a major cause for concern to the agrarian community of this region. I wanted to come up with a solution, which took four days to make the eco-friendly farm equipment,” the 39-year-old explained.

According to the inventor, the device can be operated with two hands and solar power. It has a switch, which is found on the handle for turning it on and off. It is equipped with an electrical motor with a configuration of 12 volts and 40 watts capacity, which runs at a speed of 500 rotations per minute. It contains a load switch for regulating load.

A native of Rendlaguda village in Jannaram mandal, the innovator stated that not only removing of weed, sowing of seeds could be carried out with the help of the machine. He added that many farmers approached him for buying it, considering merits and affordability.