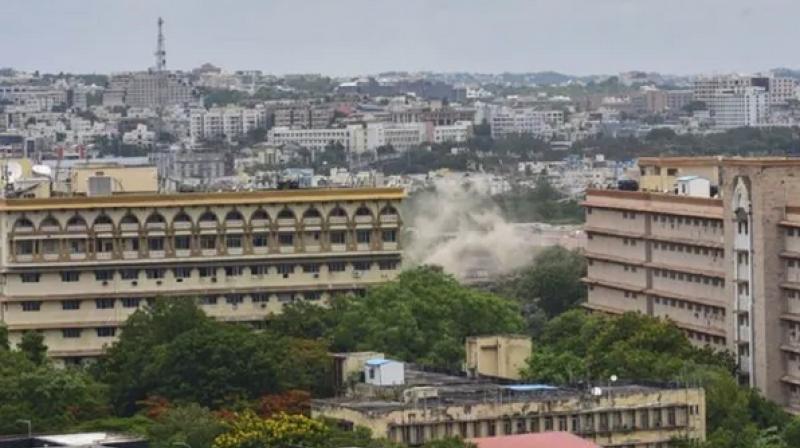 Hyderabad: Three days after the state government began demolishing secretariat buildings to construct a new one at the same site, the Telangana High Court on Friday issued an interim stay on knocking them down till Monday.

The petitioners alleged that demolishing the 10 block secretariat complex of approximately 10 lakh square feet was being done without following the due procedure of law.

The Government act is against the Construction and Demolition Waste Management Rules 2016, the Provisions of the Epidemic Diseases Act,1897 and provisions of the Environment Protection Act,1986, among other laws,the petitioners alleged.

The court ordered the state government to file its counter with all necessary details that were pointed out by the petitioner.

The K Chandrashekhar Rao-led Government began razing the secretariat building complex on July 7, days after the High Court dismissed a bunch of PILs challenging the states decision to construct a new complex by demolishing the existing one.

The petitioners alleged that the demolition of the existing is an 'arbitary action' of the state government in a pandemic situation, and deprives five lakh people of the surrounding areas from getting clean air.

On June 29, the High Court had dismissed a bunch of PILs challenging the state's decision to construct a new secretariat complex by demolishing the existing one.

After the Court cleared the decks for the construction of the new secretariat, the demolition of the old secretariat building complex began and the foundation stone for the new one was laid on June 27, 2019.

The state government had earlier indicated that the new secretariat, to come up in about seven lakh square feet, would cost around Rs 400 crore and it had decided to equip the new one with state-of-the-art connectivity and other features.