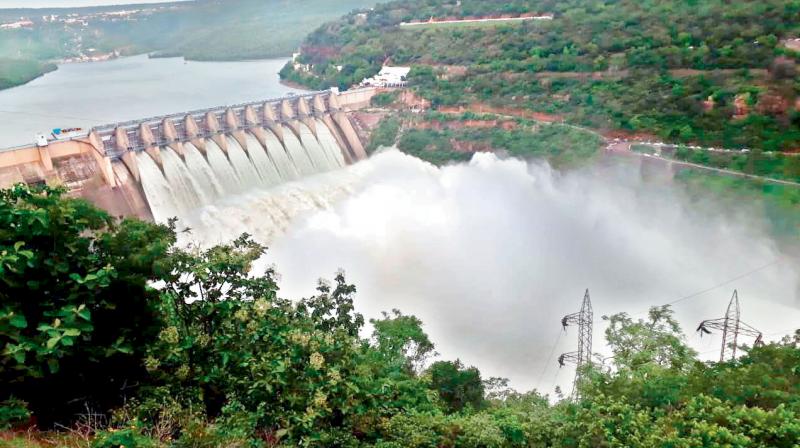 Hyderabad: With Karnataka releasing Krishna flood water from Narayanapur dam, the Priyadarshini Jurala project in Telangana State has started receiving around 4,130 cusecs of inflows on Sunday helping the engineers to operate Nettempadu and Bheema Lifts. Karnataka released 40,000 cusecs of flood water from Almatti to Narayanapura which is almost a fortnight ahead of the normal practice.

While 11,240 cusecs of water has been released by lifting two gates at Narayanapura dam the water is rushing towards Jurala and this fresh dose of flood water will reach Jurala by Monday. The Almatti with a capacity of 95.50 TMC of water at level of 1698.10 feet is discharging massive 36,130 cusecs of water to Narayanapur after retaining sufficient water for that State’s needs. The Narayanapura dam with a capacity of 33.47 TMC at a height of 1611.94 feet is releasing 11,240 cusecs.

“As of now Jurala has a capacity of 4.303 TMC of water out of the full capacity of 8.010 TMC. Water level is at 317.69 meters. We have started pumping water from two lifts Nettamapadu and Bheema,” B Parthasarathi, Executive Engineer at Jurala Dam told Telangana Today. He said that the power house at the project is not operated yet but 750 cusecs is lifted through Nettempadu and 650 cusecs through Bheema lift but the Koilsagar lift is yet be operated . The total outflows from Jurala as on Sunday is 1445 cusecs.

With the water reaching Jurala ahead of its schedule, lift of the 21.425 TMC capacity Nettempadu project have been operated from the foreshore of Jurala Reservoir. The Lift is envisaged to provide irrigation facilities to 2 lakhs acres in the drought prone upland areas of Gadwal and Alampur constituencies covering about 148 number of villages in 8 mandals besides providing drinking water facilities en-route the canal in erstwhile Mahabubnagar.

On the other hand the Rajeev Bheema Lift that can lift 20 TMC of Krishna water to irrigate 2,03,000 acres in the chronically drought affected upland areas of 15 mandals of erstwhile Mahabubnagar district and also stabilization of existing ayacut of 2134 acres under Shankarasamudram and 1866 acres under Rangasamudram tank.