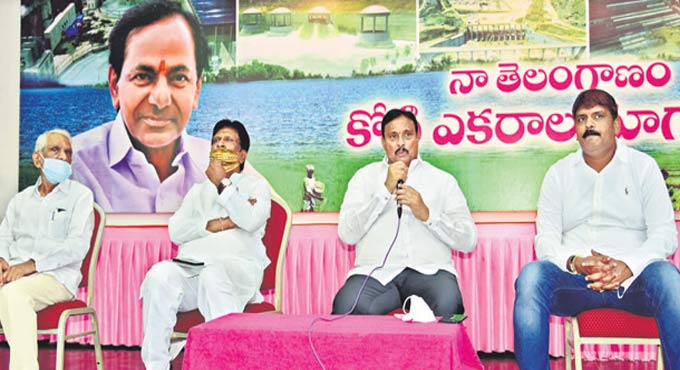 MLA Danam Nagender among other TRS leaders at a press meet in Hyderabad on Saturday.

They stated that Chief Minister K Chandrashekhar Rao had consulted religious leaders over demolition of places of worship in the Secretariat complex and had given assurances to people to reconstruct them along with the new integrated Secretariat complex.

In a scathing attack, MLA Danam Nagender stated that unable to pinpoint loopholes in the developmental and welfare activities of the State government, the Congress and the BJP leaders were trying to create a communal issue over demolition of the temple and the mosque inside the old Secretariat complex. “The demolition works were taken up only after getting an approval from the High Court. The Chief Minister also clarified on damage caused to the places of worship and promised to construct bigger and better structures in the new Secretariat complex,” he said.

He said the old Secretariat buildings were constructed without following safety standards and several fire accidents occurred in different buildings earlier. He advised the opposition parties to mind their business rather than making fools out of themselves and stated that they had no role in election of the Chief Minister.

Government Whip MS Prabhakar said the opposition parties had become intolerant and were trying to drive wedges between people from different communities to gain political mileage. He pointed out that Telangana had set an example with its Ganga-Jamuna Tehzeeb in terms of communal harmony which the opposition parties were trying to sabotage. He stated that any attempts to disrupt communal harmony in the State will not be tolerated.

GHMC Mayor Bonthu Rammohan vowed not to compromise in maintaining communal harmony in the State especially Hyderabad city. He reiterated that neither the Chief Minister nor the State government will take any decisions which will hurt the sentiments of any religion and pointed out that the Chief Minister already spoke to the religious leaders in this regard. “The Opposition parties are behaving as if such incidents never occurred in the country during their regime. Prime Minister Narendra Modi ordered for demolition of many religious structures for road expansion in Gujarat during his tenure as its Chief Minister,” he pointed out.

He asserted that the demolition works were being taken up in strict adherence to law of the land. He stated that a special plant has been established at Jeedimetla industrial area to recycle the debris collected from the demolition of the old Secretariat buildings and use them for other construction works.

MLC and TRS general secretary M Srinivas Reddy emphasised the need for an integrated Secretariat complex for effective administrative and stated that the new structure will set an example for the State’s development. He wondered why the Opposition leaders who constructed swanky new buildings by razing down their old houses, were opposing the new Secretariat complex replaced it with dilapidated buildings. He pointed out that the Congress leaders who remained silent when water from Pothireddypadu was diverted ignoring the needs of Telangana people, were making noise over construction of old buildings.