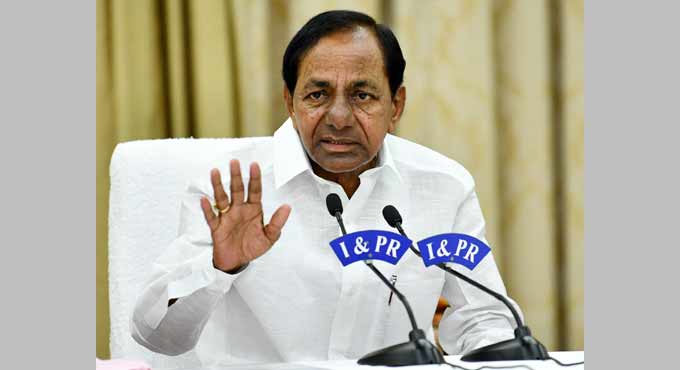 Hyderabad: Chief Minister K Chandrashekhar Rao on Saturday directed officials to immediately identify farmers who did not receive the financial incentive under Rythu Bandhu and extend the same on a priority basis.

At a high-level meeting on the implementation of the scheme and other issues pertaining to agriculture on Saturday, the Chief Minister expressed satisfaction and emphasised the need to support the farming community in the State which had laid a strong foundation to make agriculture profitable by adopting regulating farming in the ongoing Vaankalam season, following the suggestions from the State government.

One of the largest ultra-modern cold storage units would be developed within a year by the State government at with Rs 25 crore to store the seeds produced by the Telangana State Seed Development Corporation (TSSDC). He also wanted Rythu Vedikas to be ready before Dasara in all clusters across the State to ensure that farmers have a platform to interact with one another and also the officials concerned.

The Chief Minister said despite low revenues due to the Covid-19 pandemic, the State government released the Rythu Bandhu funds to farmers and ensured timely support to commence agricultural activities. He felt that the authorities acted in a coordinated manner and provided timely farm assistance to all the farmers, covering about 99.9 per cent eligible beneficiaries.

Reiterating that all the remaining farmers should receive the farm assistance, Chandrashekhar Rao wanted the Ministers and the legislators to enquire whether all farmers in their respective constituencies received the benefit and ensure that the same reaches the eligible persons without fail. He observed that some farmers did not receive the benefit due to minor issues like land rights and others.

The District Collectors were instructed to identify such cases and conduct a spot enquiry in consultation with the locals apart from issuing necessary orders to resolve the problem permanently. The local elected representatives and the Rythu Bandhu Samithis were also advised to take initiative in this regard.

“Lakshmapur village in Medchal district does not have any revenue records. With the initiative of Minister Ch Mallareddy, the authorities surveyed the entire village and determined the land ownership. It should be replicated in all such cases,” he said.

The Chief Minister said the State government would release necessary funds for Rythu Bandhu under any circumstances and will not compromise until every eligible farmer receives their farm incentive. “No farmer in the State should complain about not receiving the incentive,” he stated. He wanted the authorities concerned to obtain cluster-wise details on the number of farmers who received the incentive and submit a detailed report immediately. He also sought a separate report from the Rythu Bandhu Samithis. He insisted on updating the records immediately in case of any land transaction.

Chandrashekhar Rao said the regulated farming was suggested to ensure remunerative price to crops cultivated by farmers in the State. He pointed out that there was a welcome change among farmers who followed the instructions from the State government against maize cultivation. “The unity and awareness demonstrated by farmers would lay a strong foundation to greater success in future. The response from farmers is giving inspiration to the government, to work more rigorously towards farmers’ welfare and agriculture development,” he added.