Hyderabad: Chief Minister K. Chandrasekhar Rao on Thursday announced that a new Revenue Act will be introduced in the upcoming Budget session of the Assembly.

In his Independence Day speech at Golconda Fort after hoisting the national flag, the Chief Minister said the archaic and obsolete Revenue Acts have inflicted immense damage on farmers and other people and they must go.

“We have to undo these damages. Hence the government is engrossed in preparing a new Revenue Act. Let me share the good news with you that in the coming Budget session, the new Revenue Act will be introduced. The proposed Act will leave no room for corruption or laxity.” 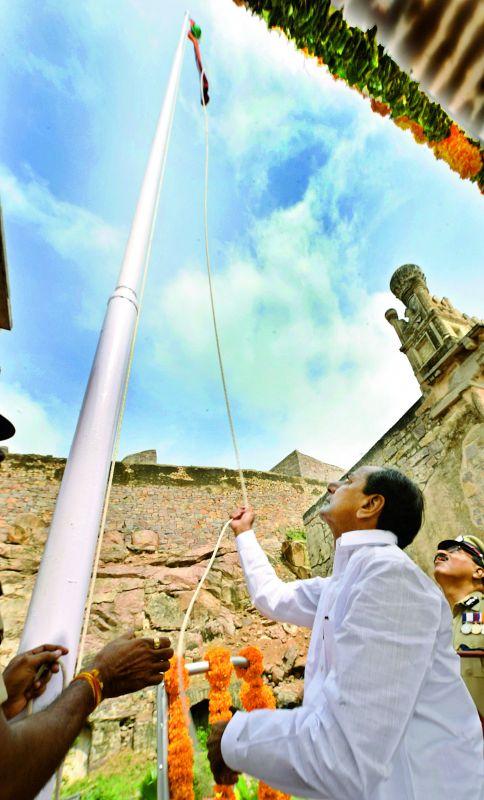 He said as part of overall administrative reforms and improving delivery of government services to the people, the government has already enacted the new Panchayat Raj and Municipal Acts.

Mr Rao said that his government believes that “good governance is possible through administrative reforms. Several existing Acts are not sufficient to offer good governance and eliminate corruption. This is the reason why the government enacted a New Panchayat Raj Act and a New Municipality Act. I am sure there will be clean, tidy villages and towns with lots of greenery.”

He said orders have been issued to waive crop loans up to Rs 1 lakh as promised during the elections and he has also fulfilled his promise of enhancing the investment support for agriculture under Rythu Bandhu from Rs 8,000 to Rs 10,000 per acre per year.

Stressing on the need to improve cleanliness and increase tree cover across the state, Mr Rao said that the government has proposed a 60-day action plan for villages and towns and will release funds from the Finance Commission grants before the commencement of the 60-day action programme to the local bodies.

He explained that one of the focus areas of the plan is to remove possible health hazards by improving cleanliness in all villages and towns and the first phase of the programme is aimed at improving sanitation in villages and towns with the participation of the people.

He said, “We all know that cleanliness is next to godliness and god manifests only where there is cleanliness. After this programme, every village and town should be clean and have organised garbage removal and disposal methods. Unhygienic conditions affect the poor the most.”

Referring to the economic growth of Telangana under the rule of his party, the Telangana Rashtra Samiti, the Chief Minister said prudent and practical fiscal policies of the government over the past five years have resulted in the state’s wealth increasing from Rs 4 lakh crore at the time of formation of Telangana State, to Rs 8.66 lakh crore today.