Hyderabad: For everyone who fought for a separate Telangana, Sunday was a re-run, a déja vu. A protest planned by the Madiga Reservation Porata Samiti (MRPS), named ‘Maha Deeksha’ in support of RTC strike, at the Dharna Chowk near Indira Park was foiled by the Hyderabad police.

Residents staying in houses around Dharna Chowk at Indira Park and commuters had a hard time on Sunday because of the high-handed behaviour of the police. The police had blocked all roads leading to the chowk to prevent activists of the Madiga Reservation Porata Samiti (MRPS) activists from holding their Maha Deeksha.

The police told shops and other establishments in the vicinity of the chowk to shut down and blocked off all roads with barricades and barbed-wire fences. The nearly two-km-long stretch from RTC Crossroads to Lower Tank Bund was almost deserted. As a constable stationed at Ashoknagar Crossroads boasted, “Not even a fly is being allowed into the area.” 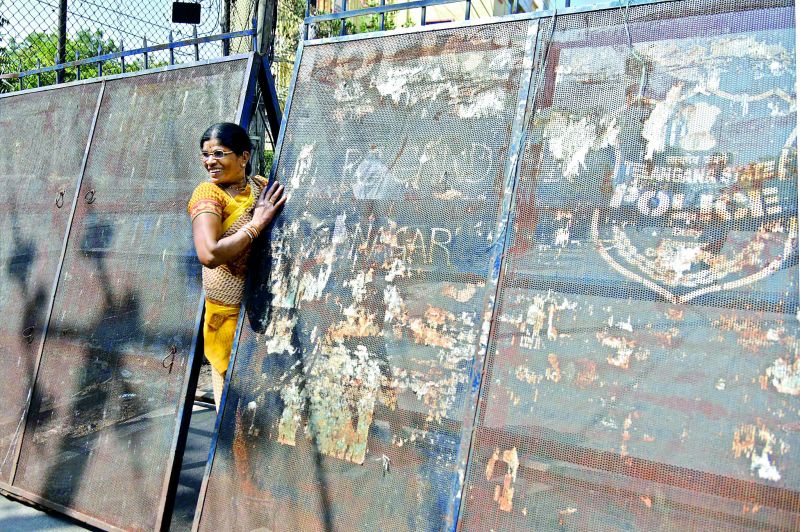 A women squeezes between barricades to go home which she said was just nearby.

All roads opening onto this stretch were blocked with barbed wire and steel barricades.

Despite repeated requests, commuters and residents were not allowed to reach their destinations even if these were close by. The paranoid policemen shooed away anyone who so much as stood near the barricades wondering how they would get home.

People were actually asked to produce address proof. Students who have moved here to prepare for competitive exams did not have any documents. One youngster asked the policeman how he could get to his hostel; the policeman simply shrugged. Others who did have documents were asked to park their vehicles near the barricades and walk home, irrespective of how long this would take. 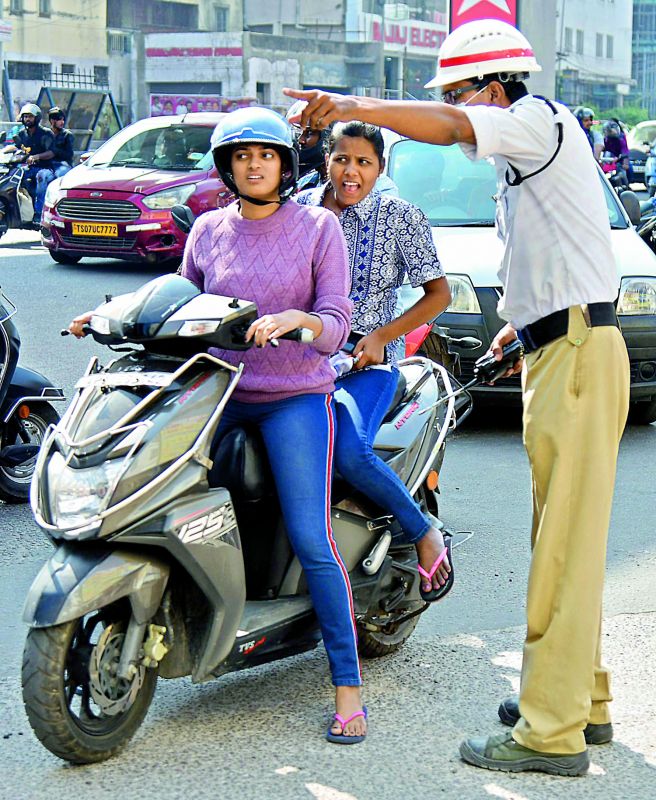 Women on a two-wheeler try to make a point with with a traffic cop to let them through.

A woman was asked to park her scooter in a bylane near Domalguda, where there was no place to park. She begged a senior policeman to let her through since her house was only a few metres away. But the police refused politely and said nothing could be done to help her. She was told she could get to her destination by driving all the way back to Himayatnagar, Necklace Road and Kavadiguda and then go via Gandhinagar. Her day got worse when her sari got caught in the barbed wire of the barricade.

Guests attending a wedding in a hall near Lower Tank Bund were also asked to walk, though some elderly guests were transported in police vehicles.

Eyewitnesses though said this was done only as long as media persons were present at the location. Many confused and angry residents picked fights with policemen. In a bylane near NTR Stadium, people on two-wheelers confronted an officer of the rank of circle inspector and one of them asked him: “Why can’t you simply let us through? My home is only 100 metres away. Just because of your security restrictions, should I not go home?”

A person trying to walk to his home near Ramakrishna Math told a constable: “You are causing a lot of inconvenience to the public.” The constable replied, “So what? You are not special. You are not the only one here.”

Pankaj, who was trying to reach his home in Domalguda said, “I don’t have any documents on me. The police are not letting me through despite my requests. I don’t know what to do.”

A woman who was trying to get to her sister’s home behind Indira Park on a scooter said, “I don’t know the roads so well. I don’t know how to go from here.”

There were many others who were equally confused. Dileep, a student of one of the many coaching centres in Ashoknagar, said many of his classmates coming from Mehdipatnam did not come to class today. “They don’t own motorbikes. There is no way they can walk here," he added.