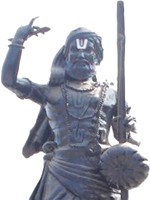 Bhadrachalarama temple was constructed by Kancharla Gopanna popularly known as Bhakta Ramadas in the year 1674 A.D.

Kancharla Gopanna, popularly known as "Bhakta Ramdas", a fervent devotee of Rama, was born to Linganna Murthy and Kamamba in Nelakondapalli village of Khammamett Taluk in 17th century (1620 AD).

He was nephew of Akkannna, the administrative head in the court of Nawab Abul Hussan shah known as 'Taneshah' of Golkonda (he was the last ruler of Golconda before Aurangazeb captured it in 1687A.D.) and was appointed by him as Tahsildar of 'Palvoncha Paragana'. Thus he was discharging his official duties earnestly and collecting revenues due to the Nawabs in continuation of daily preaches -Chanting of 'Ramanama' and the feeding the poor at his house.

Ramadasa, who heard the news that the villagers of palvoncha paragana were proceeding to witness a Jatara at Bhadrachalam , became curios and he too visited Bhadrachalam. He found the deities in an amazing appearance. Ramadas, then asked the villagers to contribute liberally for the construction of the temple.

After the contributions were found to be insufficient, the villagers appealed him to spend the revenue collections for the construction of the temple with a promise to repay the amount after harvesting the crops. Accordingly, Ramadas constructed the temple with an amount of Rs 6 Lakhs collected from the land revenues with out the permission of the Nizam Nawab.

When the temple reached to the nearing completion, he had a problem of fixing 'Sudarshana Chakra' at the crest of the main temple. He was deeply distressed and fell into sleep. On the same night, Rama in his dream asked him to have a holy dip in river Godavari where he will find that-accordingly. On the next day morning Gopanna did so and found holy Sudarshana Chakra in the river with out much difficulty.

He presumed that Sudarshana Chakra itself was shaped up with the divine power of his beloved God Rama. Soon after the construction, his miseries started. He was dismissed from service for mis-utilisation of revenue for constructing the temple and was kept in jail for 12 long years in Golkonda Fort and was tortured. Unable to withstand the miseries, Ramadas implored Rama to relieve him by singing many praising and emotional songs which got popularized from the stanzas of 'Dasaradhi Sathakam' and 'Keertanas' of Bhakta Ramadasa.