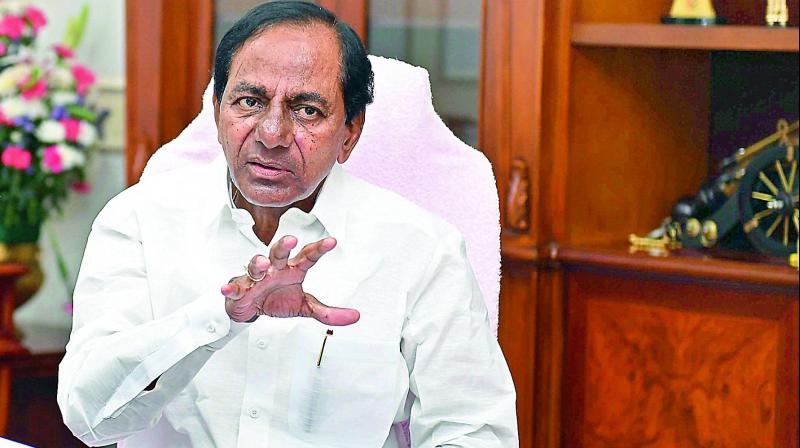 Hyderabad: The Rythu Bandhu scheme by TRS president and Telangana Chief Minister K. Chandrasekhar Rao, who is said to be wanting to enter national politics, is helping him build his image at the national level.

Mr Rao often resorts to Telangana slang in his public speeches and this goes down particularly well in rural areas. During tours of the districts, he peppers his speeches with local slang which no other politician does.

For a more national audience, Mr Rao’s sho-wpiece is the investment subsidy under Rythu Bandhu scheme, which has generated much debate nationally.

In the Karnataka Assembly elections, the BJP’s election manifesto copied many of Mr Rao’s schemes.

Mission Bhagiratha, Mission Kakatiya, double-bedroom houses for the poor and the prestigious Kaleswaram irrigation project have been praised in many quarters. No state has implemented such schemes and though their effect on the state’s coffers remains to be seen, Mr Rao has attracted attention at national level for putting them into practice.

In the farming sector, the TRS government is providing 24x7 power supply free of cost. Apart from the investment subsidy of Rs 4,000 per acre per crop, irrigation projects will supply water to one crore acres in the state.

Demand for subsidy to endowment lands

After tenant farmers demanded inclusion in the Rythu Bandhu Scheme, a new demand for investment subsidy support for endowment and Wakf land is slowly picking up.

The government gives Rs 8,000 per acre for two crops as investment subsidy to farmers under Rythu Bandhu Scheme.

The subsidy is only given to land owners, and the large number of tenant farmers are not provided support.

There are more than 12,000 temples in Telangana state under the endowments department purview, and thousands of others. Almost every village has at least one temple in the state.

As these lands are in the name of temples, archakas have told the government that if it exte-nds the Rythu Bandhu Scheme to the endowment land, the land can be farmed and money from the harvest can be utilised for daily Deepa Dhoopa Naivedyam.

Principal secretary, ag-riculture, C. Parthasara-thy said the investment subsidy was applicable only to land owners. He told this newspaper that the scheme was not applicable to land which was not in the name of any person.

Regarding endowment lands, he said they were in the name of temples and not in the name of any person, and therefore do not qualify for the Rythu Bandhu Scheme. He said some companies also hold land, and the scheme does not cover them as well.