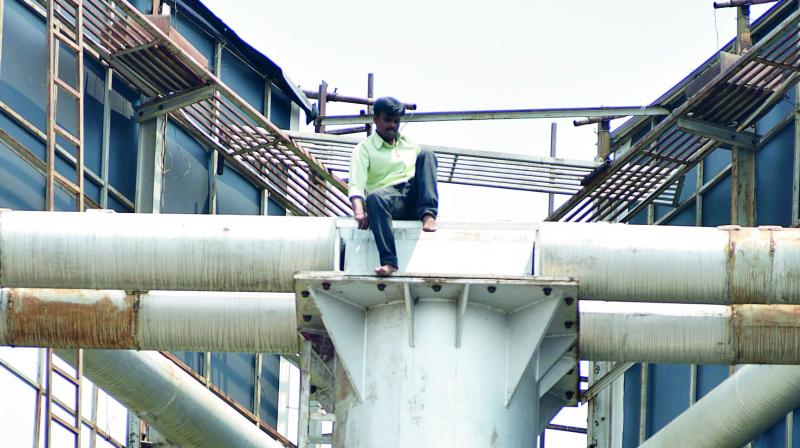 Buran Goud, an ex-home guard, threatens to jump from an advertisement hoarding at the Khairatabad junction on Monday.

Hyderabad: Around 300 ex-home-guards who had served in the undivided AP staged a protest on Monday morning on the busy Khairatabad road alleging that the government had cheated them as their services were earlier used in the unified Andhra Pradesh but later they were removed. They demanded that the government either give back their jobs or provide alternative work.

The protest took a dramatic turn when one of the men, identified as Buran Goud, climbed a unipole, claiming that he would commit suicide if their demands are not met.

Protesting against their dismissal after having put in many years of service in former Andhra Pradesh, the home-guards pleaded that they be taken back. On getting no response from the government, they, along with their families, started protesting at the Khairatabad flyover bringing the traffic to a complete standstill on Monday morning.

“They provided us with uniforms, ID cards and everything but denied us jobs in the end, stating that they do not have order copies. We are 340 men here, all ex home guards who were ‘cheated’ by the government and we demand justice to be done to this fraternity” said Goud.

The protest started around 9.40 am and went on till 12.15 pm, causing a traffic jam and gave commuters a tough time as the road is a busy stretch. Buran climbed up a unipole amidst the high drama and threatened that he would jump if the government would not fulfil their demands. Later Buran voluntarily climbed down the unipole. Meanwhile, the cops picked up the men on the ground and detained them.

“All of them have been detained including the man who climbed up the unipole. We took them all in custody” said Saidabad inspector Venkat Reddy.