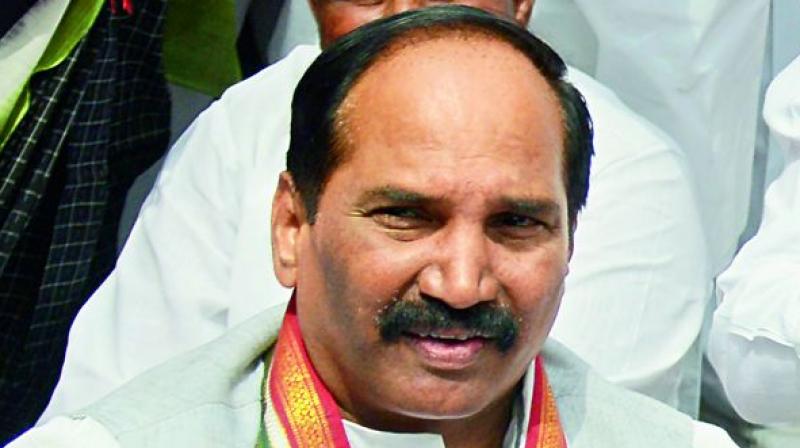 Hyderabad: The political atmosphere in the Telangana Congress party has heated up with several senior party leaders visiting Delhi on Tuesday.

Sources in the Congress said that they may ask the high command to replace Telangana Pradesh Congress Com-mittee (TPCC) president N Uttam Kumar Reddy, though the official version is that they have gone to wish AICC president Rahul Gandhi on his birthday.

Among the senior politicians who have gone to Delhi are MLAs and former ministers J Geetha Reddy and Komatireddy Venkata Reddy, TPCC working president Mallu Bhatti Vikramarka, former minister D Sridhar Babu, and former MLA K Laxma Reddy. Sources say they have been given an appointment to meet Mr Gandhi on Wednesday.

Some state Congress leaders are very disappointed at the functioning of the TPCC as elections approach and a senior leader in the group that flew to Delhi said that they have ask-ed for the TPCC president to be replaced and have no objection if one of them is appointed TPCC president.

Other senior leaders too have written to the high command about TPCC affairs and repla-cement of the TPCC president.

Senior Congress leaders are of the opinion that they are not able to cash in on the failures of the Telangana Rashtra Samithi government. The TPCC does not take up any agitation programmes against the TRS government and the Bus Yatra has brought no big political advantage to the party, a senior leader said.

However, TPCC vice president Mallu Ravi said that no one has complaints against the TPCC or its president N Uttam Kumar Reddy. He also said that there is nothing wrong in expelled MLA S.A. Sampath Kumar’s wish to become TPCC chief.