Officials told to collect data on ryots nominees by month-end 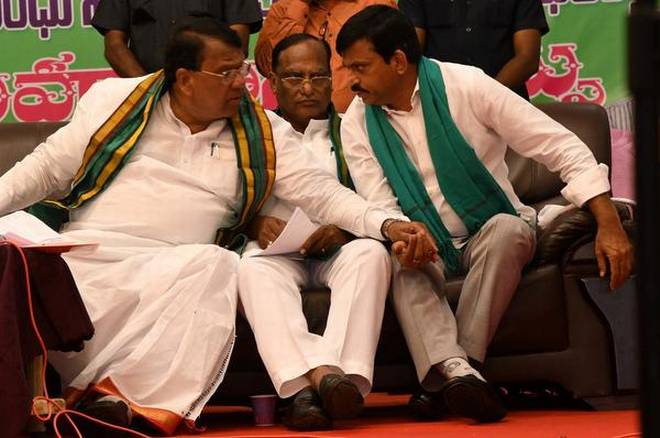 Agriculture Minister Pocharam Srinivas Reddy has called upon the field staff and the officials of the Agriculture Department to work in tandem to ensure speedy completion of the collection of data of nominees of the farmers to be covered under the proposed life insurance scheme for farmers by this month end.

All the 233 officials of the Agriculture Department and 1,833 members of the Rythu Samanvaya Samithis in the undivided Khammam district should contribute their mite for the betterment of farmers, he said.

Addressing the members and coordinators of the Rythu Samanvaya Samithis and the employees of the Agriculture Department at a meeting here on Tuesday, he said the multiple initiatives taken by the State government for the welfare of farmers and overall growth of the farm sector earned wide appreciation.

The much needed investment support has been extended to the farmers under the Rythu Bandhu scheme and the requisite quantity of seed and fertilisers had been made available for the farmers.

The State government will soon roll out the life insurance scheme covering about 50 lakh farmers across the State, he said, adding that the government will pay the prescribed annual premium of ₹ 2,271 towards the ₹ five lakh insurance cover to each eligible farmer in the entire State.

Around 10,000 tractors had been handed over to the eligible farmers on subsidy and plans are afoot to provide farm equipment to farmers involving a total subsidy of ₹ 3000 crore from the next year, he added.

He highlighted the benefits to be accrued to the farm sector after the completion of the ongoing lift irrigation projects in various parts of the State, including the undivided Khammam district.

Minister for Roads and Buildings Tummala Nageswara Rao said Telangana is at the forefront in implementing a slew of landmark initiatives for the welfare of farmers and revitalisation of farm sector.