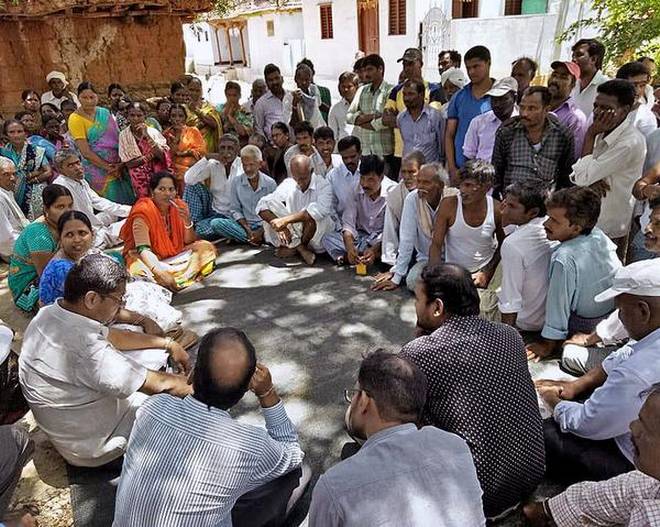 Erravalli villagers engaged in heated arguments with officials in Siddipet district on Tuesday.

After officials pacified the agitating farmers of Bailampur in Mulugu mandal over the unfulfilled demands under Kondapochamma reservoir, it was now the turn Erravalli in Kondapaka mandal under Mallannasagar, who are on agitating path.

Demanding that their demands be addressed before taking up numbering of houses, villagers of Erravalli have stalled the numbering of houses by the Irrigation Department officials. The villagers who gathered in large numbers at ‘Rachabanda’, entered into heated arguments with the officials stating that their demands were not fulfilled by the government so far and once the numbering is given, they may be forced to leave the village.

“Where should we go? We have already lost agriculture work as land is dug up? Why is injustice being meted out to us? Why are we being paid less compensation?” asked the villagers.

The villagers have submitted a two-page resolution to officials stating that they will not allow any work in the village till their demands are met. The resolution was introduced by vice-president of the village, K. Shiva Kumar.

“Paying a monthly remuneration of ₹20,000 to each family as farm work in the village has come to a halt, extending Rythu Bandhu and farmer insurance, increasing the R&R package amount as we were paid only ₹6 lakh per acre, whereas farmers of Kondapochamma were paid ₹12 lakh, extending us the government order copies under which the package is being extended, provide employment to the unemployed, issuing health cards to all, waiving off DWCRA loans, providing seats to all students of the village in education hub and constructing ‘village for village’,” said the villagers in the resolution they have passed in the meeting.

They made it clear that numbering of houses would not be allowed till they are given written assurances on these demands.

“The officials promised to take these issues to the notice of higher officials. We will wait but will not allow the work till our demands were met,” Mr. Thodu Naresh, one of the villagers told The Hindu.