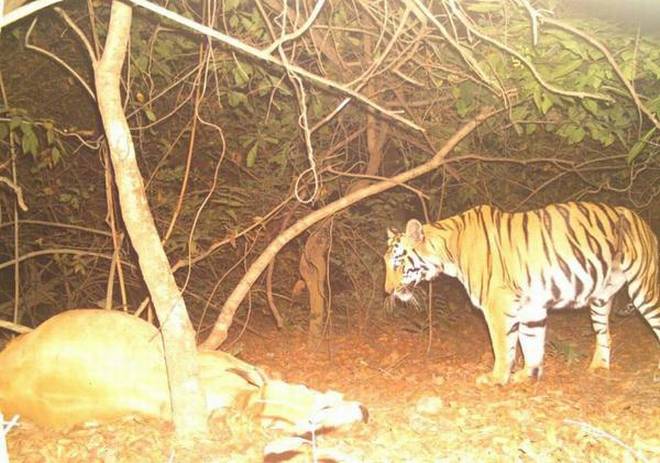 The Forest department is intensifying its efforts in the Chennur division and surrounding areas in the coming days, in order to rescue the sub-adult tigress K4 which has been roaming the jungles with a snare around her hip region for at least eight months.

A sense of urgency has enveloped the officials engaged in the rescue efforts, after the latest camera trap images showed the 2.5-year-old feline in acute distress, with deep gashes on both sides of its abdominal region. Clearly, the noose has cut deeper into muscle, as the tigress has grown in size.

Three teams will be deployed for day and night vigil at locations where pug marks of the young tigress were spotted. Each team will comprise a trained veterinarian and animal trackers, and will be equipped with imported tranquilising equipment, to immobilise the animal, officials told.

The committee constituted for capture of the animal will meet in two or three days, and finalise the action plan, they said.

Already, 204 camera traps were placed at 102 locations-- two for each square kilometre. Three cages with trap doors are placed at locations which the tigress has been frequenting.

The issue has got national attention, and Wildlife Institute of India has sent its representative to be part of the committee and rescue team.

A number of rescue efforts have failed in the past, as the animal has grown wary of human scent and foreign objects. Getting ensnared as a cub has made her clever and extremely cautious, as evidenced by her survival in a region where her three siblings have gone missing, officials feel.

K4 was one among the four cubs birthed by Phalguna, a tigress which had crossed over to Kagaznagar from Tadoba Andhari Tiger Reserve of Maharashtra. After being separated from mother, she has moved to Chennur division.

“She has been avoiding live baits, and also learnt to circumvent the camera traps. She is not even returning to its kills which tigers are wont to do,” remarked the official.

While the animal has been dependent on cattle kills mostly, she had also killed big game such as Nilgai.