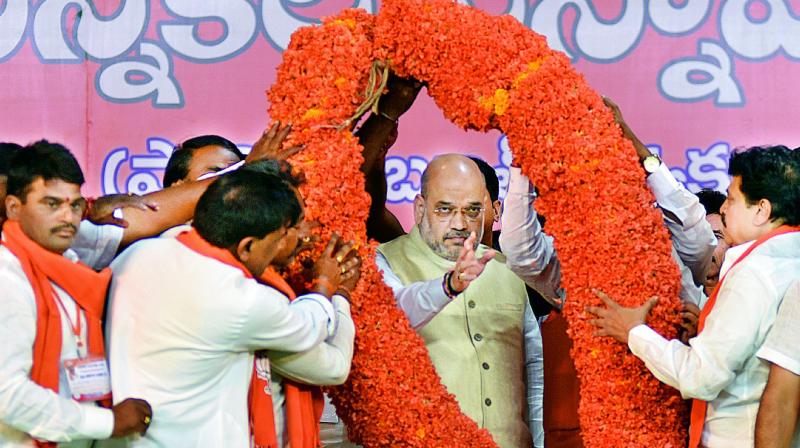 Karimnagar: Bharatiya Janata Party national president Amit Shah said that the Mahakutami — an alliance of the Congress party, the Telugu Desam, the TJS and Communist Party of India — can never be an alternative to the RS.

Addressing a gathering in Karimanagar on Wednesday, Mr Shah said that Mr Rao advanced the elections because he knew that he would be swept away by the popular support for Prime Minister Narendra Modi. By advancing elections, he has burdened the poor of Telangana with hundreds of crores.

Carrying on with his litany of Mr Rao's faults, Mr Shah said Mr Rao made 150 promises and could not keep even a single promise. He said under the Modi government a “Ganga of development” was flowing copiously and appealed to people to give a chance to the BJP to bring that Ganga to Telangana state.

He asked how Mr Rao could extend 12 per cent reservation to minorities without affecting the interests of Scheduled Castes, Scheduled Tribes and Other Backward Castes. He challenged him to spell out whose reservation share he was going to knock off to please the minorities.

He said that the BJP was committed to driving out “infiltrators” from Telangana state and announced that a national register of citizens would be opened if the BJP came to power.  “Neither Mr Rao nor Mr Naidu, the Congress, or the communists can take up such an exercise,” he said.

Raking up the forgotten issue of the cremation of former Prime Minister P.V. Narasimha Rao, he said that Narendra Modi walked five kilometres to attend the funeral of Atal Behari Vajpayee, whereas Sonia Gandhi did not care to see whether Agni Sanskar was complete or not.

When Mr Rao was a minister in the Congress-led UPA government, he brought only Rs 16,597 crore under the 13th Finance Commission. But the Modi government allocated Rs 1,15,900 crore in the 14th Finance Commission and was ready to spend another Rs 1,15,000 crore for the development of Telangana, Mr Shah said.