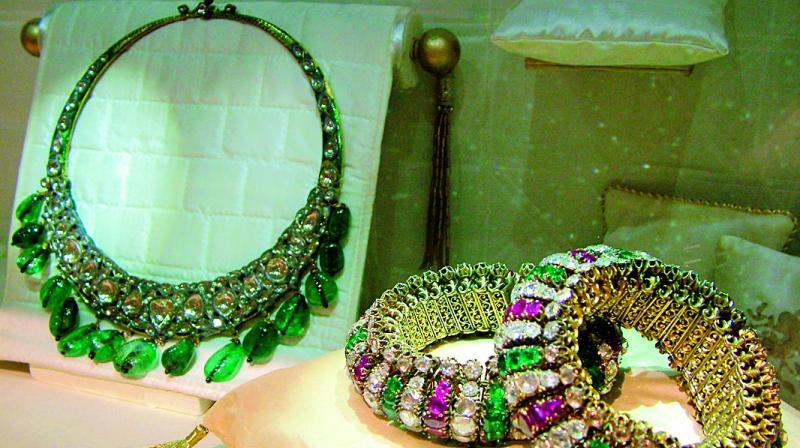 This will be the third time the collection is being displayed in the national capital. The first time was in 2001 and the second time, in 2007.

Hyderabad: The Hyderabad Nizam’s jewellery collection will be on display, after 12 long years, at the Indian Museum in Delhi. The date has not been decided yet, but National Museum authorities have begun the groundwork. And just as news about the exhibition became known, a long-pending request to bring back Hyderabad’s heirloom has also surfaced.

The National Museum had last exhibited the jewellery in Delhi in 2007. Before that it was exhibited there in 2001. It was also displayed at the Salar Ju-ng Museum in Hyderabad for a few days in 2001 and 2006. The jewellery is kept in the vaults of the Rese-rve Bank of India in Delhi.

The trustee of Nizam VIII Walashan Mukarram Jah Bahadur Trust, Mr Faiz Khan, said the time has come to bring back this jewelry to Hyderabad. “Our Chief Minister, Mr K. Chandrashekar Rao, has shown immense interest in bringing back jewels and had assured the Assembly in November 2017 when MIM Floor leader Akbaruddin Owaisi raised the issue. He hoped that the KCR government will pursue the matter with the Union government and ensure its return to Hyderabad.”

Mr Ram Lal, a heritage enthusiast, said the jewellery belongs to Hydera-bad and should be brought back. But the state government has not made any effort to build a special enclosure to house this jewellery and other belongings of Hyderabad’s rulers.

Mr Lal is contemplating to file a petition before the Supreme Court, seeking that it give directions to bring the treasure back to Hyderabad, as it has sentimental value in Hyde-rabad “and we have more rights than any other.”

Experts says the jewellery represents the culture, elegance, lifestyle and fashion of erstwhile Hyderabad. “It will not only restore the glory of this jewellery but also increase tourism,” he said. Khan said that Princess Esra, former wife of Prince Mukarram Jah, is keen to house this fabled jewelry in Hyderabad as it is a pride of Hyderabad.