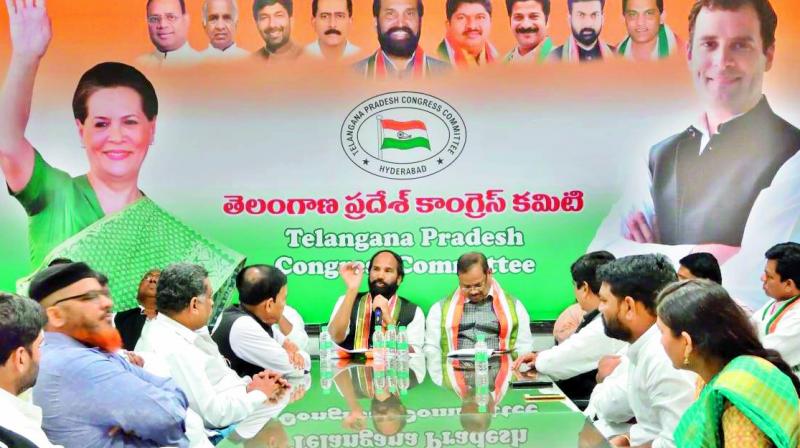 HYDERABAD: The Telangana Pradesh Congress Committee has decided to take up massive protests against anti-Dalit and backward classes attitude of the BJP government at the centre.

A decision in this regard was taken after senior leaders of the TPCC met at Gandhi Bhawan on Wednesday under the chairmanship of state party chief N. Uttam Kumar Reddy in the background of Supreme Court’s verdict on reservations for SCs and STs.

Addressing media after the meeting, Uttam Kumar Reddy recalled Supreme Court saying that reservation in promotions was not a fundamental right. However, the BJP-led government at the centre did not utter a single word against the SC verdict. The TPCC chief charged that BJP is trying to deprive SCs, STs and BCs of reservations in the name of Supreme Court’s verdict.

He announced that a dharna would be held on February 16 at Indira Park against the attitude of centre towards reservations. He assured that Congress would fight to protect SC, ST and other backward class reservations at the national level, alleging that the central and state governments are suppressing the rights of SCs and STs.

At the meeting, CLP leader Bhatti Vikramarka recalled that the Congress had introduced a number of laws to ensure that Dalits, BCs and minorities lived a dignified life. But the present BJP government has hatched a conspiracy to remove reservations.

The CLP leader charged that when former MP V. Hanumantha Rao attempted to install a statue of Dr. B. R. Ambedkar at Punjagutta Circle, the TRS government blocked the move and even destroyed the statue. He asserted that if the state government fails to install Ambedkar’s statue at Punjagutta, the Congress would do so.

“The disruption caused by Covid-19 pandemic has forced us to embrace technology in a way never seen before and has helped accelerate our approach towards remote working and implementation of digital solutions.”, said Rama Rao.

The complaint filed by Vijayawada Central tahsildar claimed that the hotel and hospital authorities were aware of electrical defects in the building.

1,039 complaints against private hospitals in Telangana so far

Of the total complaints received, 16 are on insurance covers. The special team will also look into the same, Dr Rao said.

According to their observation, immunity in 80 per cent of Covid patients decreases due to psychological turbulence.

Andhra Pradesh, Telangana Coronavirus Live updates: Andhra Pradesh crossed the 2 lakh mark Friday as another 10,171 were added taking the overall tally to 2,06,960 out of which over 1.2 lakh people have recovered till now.

Kerala rain: Red warnings for 5 districts on Saturday, for 3 on Sunday

Idukki, where the disastrous mudslide occurred on Friday, killing 18 people, is expected to receive extremely heavy rainfall till August 10.

Tollywood star Chiranjeevi urged those who recovered from Covid-19 to come forward and donate it to those who need it.