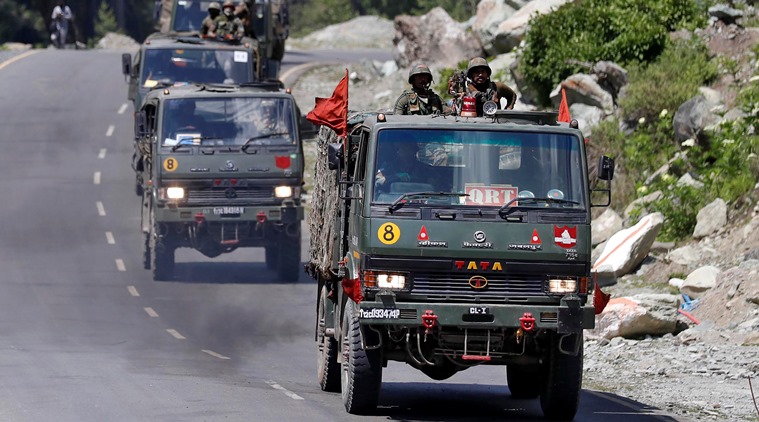 In the first signs of disengagement between Indian and Chinese troops on the Line of Actual Control (LAC) in Ladakh, the soldiers of both sides have started moving back at PP14 in Galwan area. Similar movement from the two parties is also expected at the other two standoff sites of PP15 and PP17A in the Hot Springs sector.

The confirmation of troops moving back in the Galwan Valley and the Hot Springs came after reported Monday morning that there were tentative signs of a climbdown at some “friction points”, five days after the Corps Commander-level talks agreed on a step-by-step de-escalation. Under this, both sides were supposed to withdraw manpower and structures and a verification was to be done by July 5.

Government sources told The Indian Express that the “process has commenced after some activity was seen on the Chinese side in Galwan yesterday evening where they have now dismantled the defences they had constructed and have cleared the area. Certain vehicles have also been coming to the location to take the troops towards their side.”

“Teams from the Army did go to verify at some points where our forces are in a standoff. Detailed reports will reach us only tomorrow but there is evidence of some withdrawal of manpower and dismantling of structures, at least in the Galwan area,” a senior security establishment officer said.

This has been recorded in the past three days, the officer said, adding that the progress is “tardy…not as desired”.

“We do not know if that’s intentional. The weather in the past few days has not been good. At Galwan, the river is in spate. That can make the movement slower,” he added.

Opinion | Why Jagat Mehta would have seen Xi in the Mao mould, not Deng

Sources stressed that the process is still underway and the distance by which both sides will go back cannot be confirmed. Any confirmation will only be possible after a verification, sources clarified.

A Home Ministry official said that a timeline of about 10 days had been drawn keeping in mind what can be achieved each day, with targets defined every three to five days.

“There may be a need to revise these timelines but at least some progress is being made in the Galwan region. That is the priority area for us,” the official said.

“As far as the build-up in Depsang is concerned, that is a matter of concern. Tangible results may take time given how talks play out,” the official said.

The location at PP14 in Galwan, where the Chinese side have dismantled their defences, was occupied by them again following the violent clashes on June 15 after Indian soldiers went to evict a Chinese post from the area. Twenty Indian soldiers and an unspecified number of Chinese soldiers were killed in the faceoff.

In the other standoff sites on PP15 and PP17A, Chinese rents are being dismantled, government sources said, adding that the Chinese military vehicles are still coming in. These sites fall in the Hot Springs sector, with PP17A also known as Gogra.