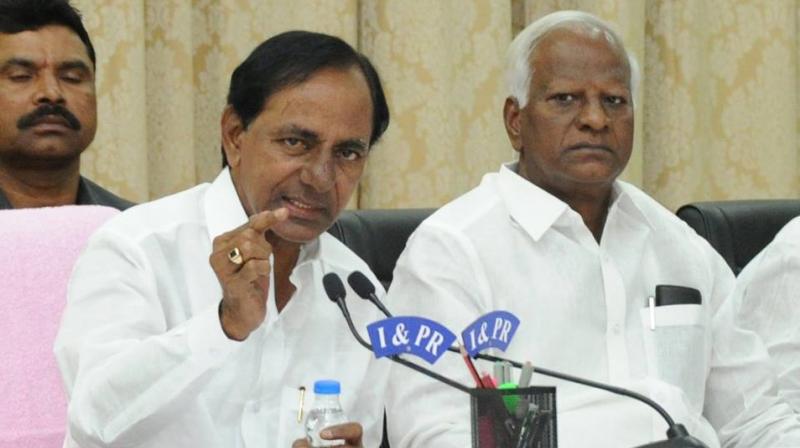 Hyderabad: A high-level meeting chaired by Telangana chief minister K. Chandrashekhar Rao unanimously decided to play hard ball when an apex meeting is convened to try to resolve the long-standing dispute between Andhra Pradesh and Telangana over sharing the waters of the Krishna and Godavari rivers.

Thursday's meeting was called to nuance Telangana's strategy ahead on the dispute. It is to not yield an inch, and to rush all ongoing projects to achieve a fait accompli.

Telangana has also decided to drag its heels over an August 5 meeting. The chief secretary has been asked to write a letter to the central government asking to have CWRM apex council meeting after August 20, or some time after the completion of the Independence Day celebrations on August 15. As for August 5, well, the state government has another pre-fixed programme on that date.

The meeting unanimously resolved that projects such as like Palamuru Ranga Reddy and Dindi lift irrigation schemes, aimed at supplying irrigation water to Mahbubnagar, Ranga Reddy and Nalgonda districts, subjected to gross injustices during united AP rule, should be completed on a priority basis.

It took the view that the Centre has failed to ensure a just sharing of waters between the two states. Telangana's stance is that water sharing is mandated to be done through the Union Water Resource Ministry in case of no disputes between both states, but when there are disputes they should be entrusted to the tribunal to resolve.

The meeting condemned the way CWRM turned a deaf ear to the Telangana government's requests. Participants at the meeting expressed anguish that both the states are paying a heavy price due to the irresponsible behaviour of the Centre.