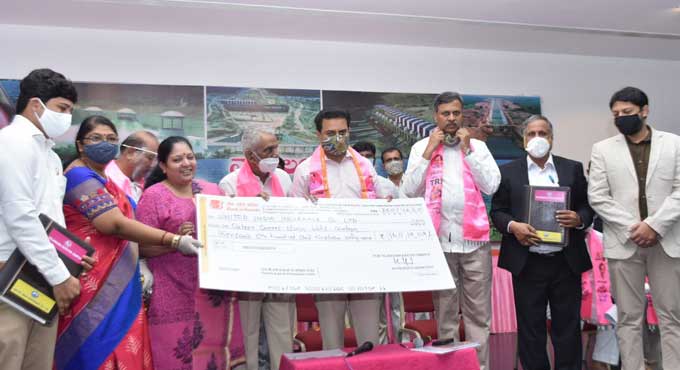 Hyderabad: TRS witnessed several ups and downs over the last 20 years, and the party will remain intact for next 100 years, said TRS working president and Minister KT Rama Rao. He said though the party was thrown out of Jala Drushyam soon after its formation, the party realised the dream of Telangana State due to the sheer hardwork and perseverances of its cadre.

“The party activists have taken care of it for several years and now, the party is in a position to take care of its activists. We have paid Rs 16.11 crore as premium towards accidental insurance of over 60 lakh party activists this year,” Rama Rao said. He handed over the cheque to the representatives of United India Life Insurance at Telangana Bhavan here on Saturday. In case of accidental death of any TRS activist, the bereaved family will receive an insurance of Rs two lakh.

Speaking on the occasion, the TRS working president said the party faced several hurdles including conspiracies to wipe it out in its journey to achieve separate statehood for Telangana. However, he pointed out that the then movement leader and the current Chief Minister K Chandrashekhar Rao had remained strong and took forward the movement. “The party workers did not make any ordinary sacrifices during this journey. Today, the party had grown into an invincible and strong political force in the country. We are planning to take more programmes for the welfare of the party cadre,” he stated.

Rama Rao asked the TRS MLAs to interact with the party activists frequently and resolve their issues, if any. He also suggested them to bring major issues faced by the party workers to the party’s notice. While the construction of the TRS district offices are nearing completion, he promised to inaugurate them soon. The training programmes have been postponed due to the COVID-19 pandemic.

Meanwhile, the Minister urged the TRS activists to act as a bridge between the people of the State and the State government. He wanted them to work their might and extend strong support to the people during the COVID-19 crisis. He said the government was also taking all measures for welfare of people, besides implementing multiple development programmes. He pointed out that he had donated six ambulances in personal capacity on the occasion of his birthday and other leaders have come forward to donate a total 100 ambulances across the State. He requested the party leaders to take up similar activities in their personal capacity.