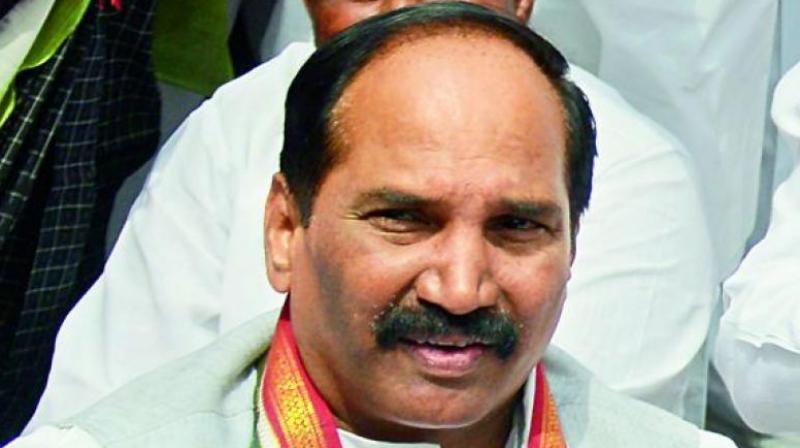 In a letter also signed by the Telangana Congress' Krishna Water Protection Committee convener Ram Mohan Reddy, Uttam Kumar Reddy contended that the project was illegal and the Andhra Pradesh government had no right to divert water from the Krishna basin to the Pennar basin. Such a project would be against the interests of the people of Telangana.

The two Congress leaders said Andhra Pradesh was being brazen. Two letters have been written by the Krishna River Board chairman raising objections to the project but the government of Jagan Mohan Reddy had not even bothered to reply while going on to invite tenders for the project.

“In case the AP government does go ahead with the physical execution of the above works, the Congress Party demands that you accept moral responsibility for failing to protect the interests of Telangana and you should resign as chief minister,” the letter said.

If the AP government is not stopped from building this project, several irrigation projects in Telangana such as Kaleshwaram Lift Irrigation Scheme, Palamuru-Ranga Reddy Lift Irrigation Scheme, Dindi Project, Srisailam Left Bank Canal and A Madhava Reddy Project would be adversely affected. "There is a real danger of Mahabubnagar, Ranga Reddy and Nalgonda districts turning into a desert," the two Congress leaders said.

Drinking water supply to Hyderabad would also be affected.

“It is indeed surprising and shocking that when the government of India calls for an apex council meeting tomorrow (August 5) on such an important subject as the above, you have chosen to hold a cabinet meeting for the new Secretariat building design on the same day," the letter said.

They pointed out that if the AP government completes the Pothireddypadu expansion from 44,000 cusecs to 80,000 cusecs per day and builds the Rayalaseema lift project to draw 3 tmc ft of Krishna water per day, the very purpose of creation of Telangana (to prevent injustice in allocation of water) would be defeated.

They requested Chandrashekar Rao to attend the meeting called by water resources minister Gajendra Singh Shekhawat on August 5 and also file a case in the Supreme Court immediately to have the AP government's orders 203 and 388 quashed.