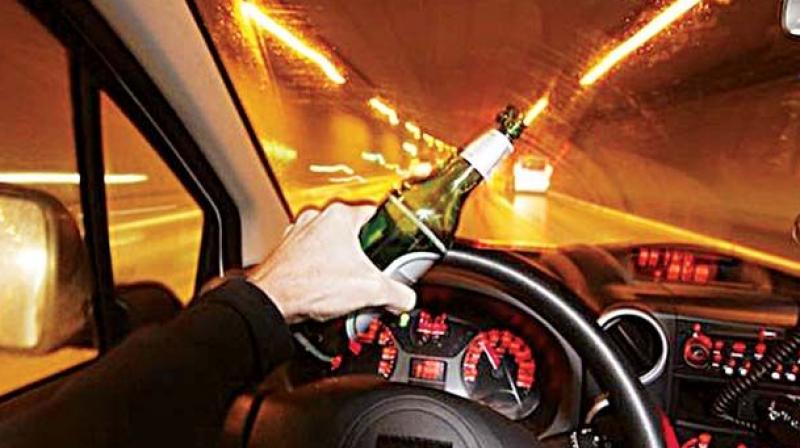 A 45-year-old drunk driver B Keshava, rammed his borrowed Ford EcoSports car into four vehicles in Hyderabad leaving one dead and another person injured on Monday night in Hyderabad. Several police teams gave him a 10 km chase on city roads and managed to finally apprehend the drunk driver.

B Keshava, a resident of Langar Houz, on Monday took his brother's EcoSport vehicle out for a drive but consumed liquor under the LB Nagar Police station limits. He was driving towards Kismatpur when he hit and damaged a car. He then hit an auto-rickshaw at Budvel, about 3.2 kilometres from the site of the first accident.

Keshava was speeding towards Shivarampally when he rammed the car into a Honda Activa scooter driven by Srinivas, near PVNR Expressway Pillar Number 203. Srinivas, a resident of Kismatpur, was returning home after meeting his sister for Raksha Bandhan, reported Times of India.

From Rajendranagar road where the accident took place, Keshava moved towards Mailardevpally where he hit another two-wheeler injuring the rider, G Shiva, reported Times of India (ToI).

According to reports, police teams had to chase Keshava for close to 10 kilometres and finally managed to intercept the car near Shamshabad. Breath analyser results recorded 550 mg/ litre of alcohol content in Keshava’s blood, while the permissible limit is just 30 mg/ litre. The 45-year-old has been arrested under charges of culpable homicide not amounting to murder and is under judicial remand, said inspector G Suresh of Rajendrabnagar police station to media.

In another incident that took place again on Monday night, a 16-year-old identified as Raghavendra who was triple riding with his two friends, Hemanth and Dilip on a two-wheeler, met with an accident while proceeding towards Mohan Nagar. Their vehicle was run over by a Hyundai i10 coming in the wrong direction. Raghavendra died on the spot while his two friends suffered injuries. The three youths were returning home after visiting Omni hospital, reported ToI. The Chaitanyapuri police have arrested the driver of the car.