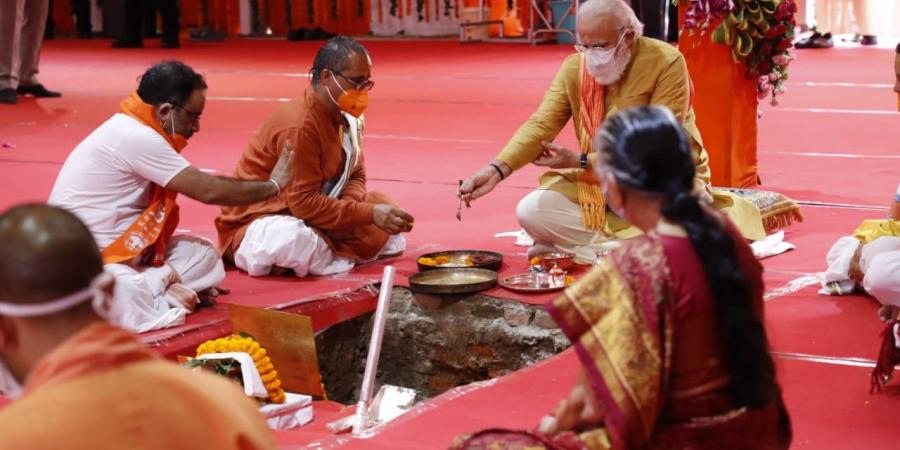 The Hyderabad MP who was addressing mediapersons hours after the completion of the Bhoomi Pujan said, "By attending the Bhoomi Pujan, Prime Minister Narendra Modi has violated his constitutional oath and the tenet of secularism. His attendance is the victory of Hindutva and he has laid the foundation of Hindu Rashtra today."

He also criticised Modi's apparent statement equating the Independence Day with Bhoomi Pujan. "In his speech, he equated August 15 with today. I again want to tell him that August 15 is for the freedom of our country. Is the PM trying to tell that his followers have gotten freedom from something?"

The Hyderabad MP also took a potshot at the presence of the RSS chief Mohan Bhagwat at the event, who in his statement said that the Bhoomi Pujan 'marked the beginning of a new India'. Owaisi asked, "What new India is he talking about? He is talking about a Hindu Rashtra where Muslims will be treated as second class citizens."

Lastly, he also trained his guns towards the Congress and other 'secular parties'. To the Congress, he asked how the Bhoomi Pujan was a symbol of brotherhood. "Thousands died in the riots involving Babri Masjid, a mosque was demolished. Is this brotherhood?" he asked

Owaisi said he was emotional today because the mosque was demolished illegally and that the 'Sangh Parivar and BJP lied to the Supreme Court' on it.