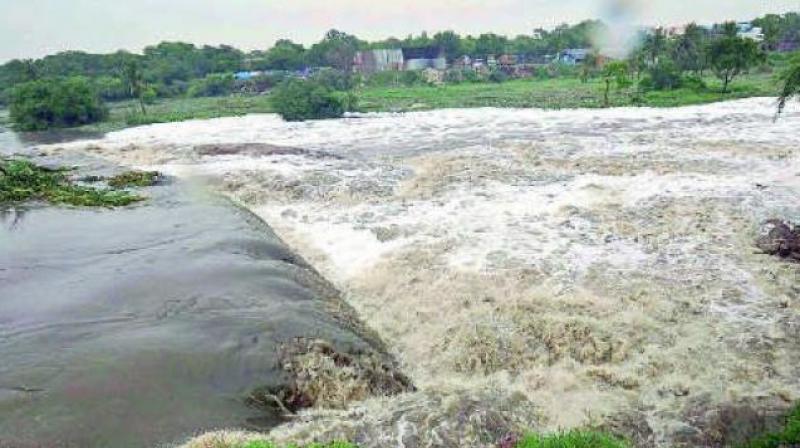 HYDERABAD: As inflows to Almatti dam are expected to increase due to heavy rains in Maharashtra, the Central Water Commission (CWC) on Wednesday advised to deplete Narayanpur dam, which is nearing its full reservoir level (FRL). With this, Srisailam dam is expected to get good inflows in this week.

According to CWC’s advisory, combined flows from Krishna, Doodhganga, Panchaganga and Ghataprabha rivers will be realised in Almatti dam, which is currently 71 per cent full and will see a rapid rise in inflows from Thursday.

Since Narayanpur dam, situated on the downstream course of Almatti dam, is almost full, it must be depleted, the advisory suggested.

With heavy rainfall warning in upper Krishna, upper Bhima and upper Tungabhadra basin areas, inflows to Koyna, Warana, Veer, Ujjani, Almatti, Tungabhadra dams and Hippargi and Singatluru barrages are expected to increase in the next 24 to 48 hours.

The advisory said that hence, authorities of these dams may monitor the situation and accordingly operate the releases. Heavy rainfall in the upper Krishna basin led to increased inflows (58,000 cusecs) into the Hippargi barrage, giving rise to higher outflow thereafter.

Subsequently, heavy inflows are expected at Almatti dam in the next 24 hours due to flows from Krishna (Hippargi barrage outflow), Doodhganga (Sadalga site), Panchaganga, Ghataprabha(Gokak site) rivers. This may lead to the water level crossing the dam’s threshold limit.

Hence, authorities may monitor the situation and accordingly operate the releases, the advisory said. Till 6 am on Wednesday, rainfall at Mahabaleshwar was recorded at 320.9 mm, 241 mm in Koyna, 207 mm in Agumbe and 140 mm in Warana.

Locals and officials have expressed happiness over the arrival of flood waters in Singur project after a long time. Due to low rainfall for the past three years, storage levels in the project had reached a dead level, but the project received around 2 tmcft of flood water in the first week of August.

Officials estimate that 7-10 tmcft of more water can arrive in two months. The water received now was due to rainfall in the Manjeera catchment area since the first week of June. If Karnataka and Maharashtra witness heavy rain, it will result in flood water entering Manjeera River from Gaudigam Janwada of Sangareddy district.

Officials said any rainfall at this time will not get absorbed into the soil, but will flow into the project. They said there was only 1 tmcft of water in the project by July 20 and as of Wednesday, around 2 tmcft of flood water entered the project due to rains for the past one week in catchment areas.

Telangana, Andhra Pradesh to get KRMB water for drinking & irrigation

The current release water allocations included drinking water needs of both Hyderabad and Chennai. However, Telangana officials wanted the KRMB to release 7.746 tmcft more water to meet the requirements of Telangana

Inflows to Koyna, Warana, Veer, Ujjani, Almatti, Tungabhadra dams and Hippargi and Singatluru barrages are expected to increase in the next 24 to 48 hours. Hence, authorities of these dams may monitor the situation and accordingly operate the releases, the advisory said. Before releasing water from the dams, officials are asked to inform all the concerned downstream district authorities in Maharashtra and Karnataka, lower riparian States and the CWC