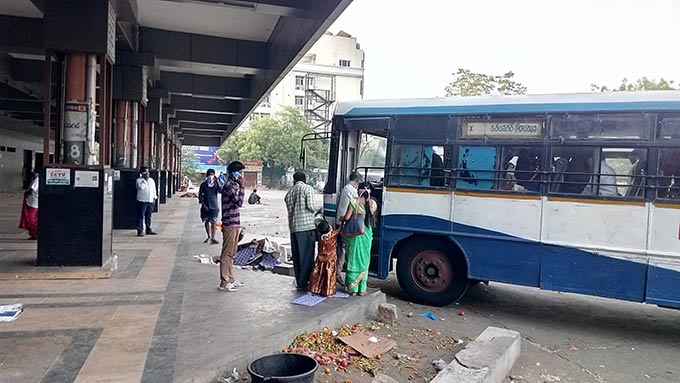 VIJAYAWADA: Officials of the Andhra Pradesh State Road Transport Corporation (APSRTC) have written to their Telangana counterparts seeking  resumption of interstate bus services.Speaking to TNIE on Saturday, RTC executive director (operations) KS Brahmananda Reddy said that during Unlock 1.0, Chief Secretary Neelam Sawhney has written to her counterparts in Telangana, Karnataka, Tamilnadu and Odisha for resuming interstate bus services. However, only the Karnataka government gave consent for resuming interstate bus services to Bengaluru and other interior parts of that State from June 17. The remaining neighbouring States didn’t give their consent due to the spurt in the number of COVID-19, especially in Chennai and Hyderabad, he said.

Asked about the response from Telangana over resuming bus services to Hyderabad from the State, the executive director said that on June 18, a delegation from TSRTC arrived in Vijayawada and convened a meeting with APSRTC officials. “We have sent proposals to  Telangana to operate 256 services in the first phase from 13 districts of the State. During the first round talks, we have decided to enter into an agreement to resume the services by following the guidelines prescribed by the Centre for interstate movement of buses. However, the second round of talks, scheduled to be held in Hyderabad on June 24, was called off after Covid cases emerged at the TSRTC head office, Bus Bhavan,” Brahmananda Reddy said.

Once again, the APSRTC officials consulted the TSRTC officials to resume bus services during the Unlock 3.0. “However, the Telangana officials are yet to respond to our second letter seeking their consent for resuming interstate bus services,” he said. Informing about resumption of bus services to Chennai, Reddy said the Tamil Nadu government is likely to take a call on the issue soon.