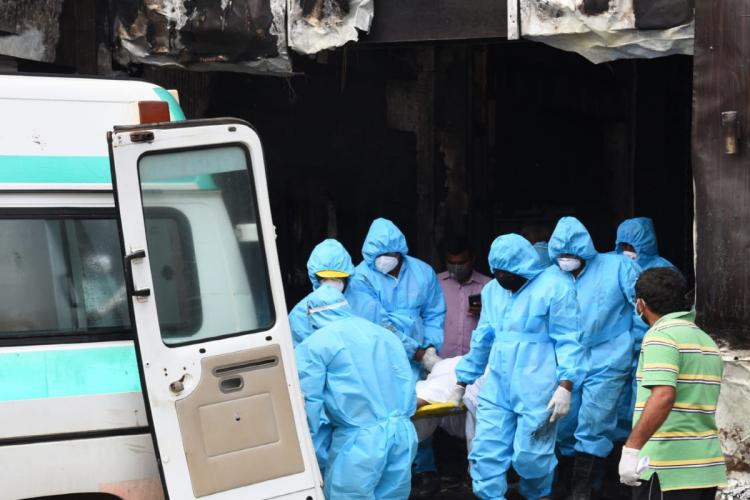 Hours after a deadly fire killed at least 10 COVID-19 patients at a Covid care facility in Vijayawada, an FIR was filed at the Governorpet police station based on a complaint from the Mandal Revenue Officer (MRO) of Vijayawada Central. Tahsildar P Jayasri filed a complaint naming the management of Ramesh Hospital and Hotel Swarna Palace naming them as suspected or accused parties.

The complaint claimed that the authorities of Ramesh Hospitals and Hotel Swarna Palace management knew that there were electrical defects in the hostel building that could lead to a short circuit fire, but went ahead to set up a COVID-19 care centre in the building without conducting the necessary repairs as they would have cost a lot of money.

A fire broke out in the early hours of Sunday morning at the hotel which had been leased by Ramesh Hospitals to run a COVID-19 care centre for patients with mild symptoms. According to state Health Minister Alla Kali Krishna Srinivas (Nani), there were 43 people present at the hotel when the incident occurred, including 30 COVID-19 patients. Of these people, at least 10 patients are believed to have lost their lives. The Minister claimed that the remaining 20 patients are being treated in a hospital, and there is no danger to their lives.

In her report, tahsildar Jayasri wrote that Ramesh Hospitals had entered an MoU with Hotel Swarna Palace, to run a COVID-10 care centre as a paid service. “It appears that the managements of the Hotel Swarna Palace and the Ramesh Hospital had knowledge that there are electrical defects in the lodge, and as rectification of defects involved with huge huge amount, avoided to repair it. Knowing the fact that if the defects were not rectified, there is every possibility of shortage of electricity they opened the covid-19 Centre in the swarna palace,” she wrote.

Stating that 10 persons have died in the fire that broke out on Sunday morning, and 20 patients and staff members were injured, she said that the management of Hotel Swarna Palace, and authorities of Ramesh Hospitals, were responsible for the deaths. However, the complaint makes no mention about the role played by any government official in sanctioning the hotel as a covid care facility.

A case was registered against the hotel and hospital managements under section 304 (II) (punishment for culpable homicide not amounting to murder) and 308 (attempt to commit culpable homicide) read with 34 (acts done by several persons in furtherance of common intention) of the Indian Penal Code.