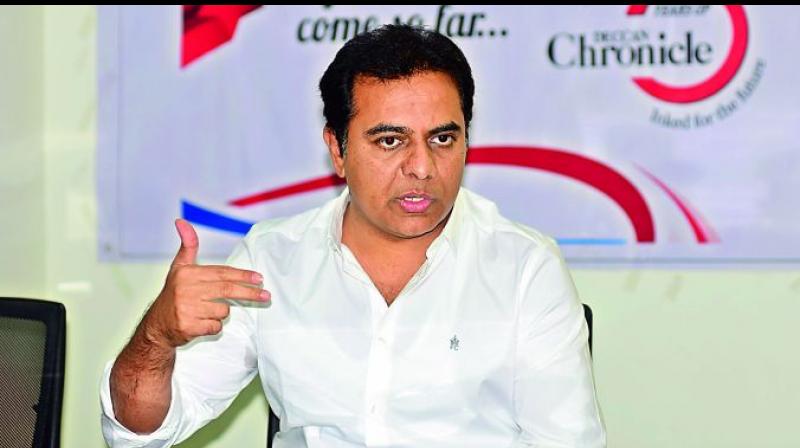 Hyderabad: Industries and Information Technology Minister K T Rama Rao has urged the union government to keep its word given to the new born State of Telangana and set up a railway coach factory in public sector at Kazipet. Speaking after laying foundation stone for Medha Rail Coach factoryat Kondakal village in Ranga Reddy district here on Thursday, the minister recalle that the State was assured of a railway coach factory in Kazipet in the bifurcation Act itself, but the promise was not honoured.

“Telangana is a new and progressive State and the centre must assist this growth-oriented State by setting up the coach factory in the public sector,” he demanded. Lauding the Medha Servo Drives Pvt Ltd founded by son of the soil Y Yugandhar Reddy for coming forward to set up the Rs 1000 crore factory, he said it was expected tom provide direct employment to 1000 persons and indirectly employ 1500 more. The annual capacity of the factory would be 500 coaches and 50 locomotives.

Rama Rao pointed out that the new state had dispelled the initial apprehensions that investments in Telangana won’t be safe and that there would be a mass migration of industries and investments to other States. “During the past six years several major industries have set shop in Telangana. Now we will be home for the largest coach factory in private sector in the country,” he said. He attributed the stupendous growth of Medha, established in 2005 to sheer hardwork, the minister pointed out that Medha had a turnover of Rs 25 crore, but now it had set up 12 factories in across five continents. “Medha being a home grown company makes Telangana proud,” he added.

“So far we have an aviation hub at Adibhatla that makes components for Boeing, Apache, Sikorsky, a tractor factory at Zaheerebad, bus building unit in Hyderabad and now even rail coaches will be manufactured in Telangana,” he said. He called upon Medhato explore the possibility of entering into fray for the Rs 30,000 crore initiative of Union Government for manufature of Metro coaches coaches. Medha already has experience in manufacture of “Vandebharat” locomotives that run at 160 km speed linking Varanasi-New Delhi, propulsion systems and signaling. He asked Medha to participate in the monorail or metro rail projects in tier two cities like Warangal.

“Telangana must transform into a self-reliant State, which is the aim of the Chief minister. We must acquire the knowledge to manufacture world class equipment. As Medha wishes they can partner with European companies making Telangana, the only State that could produce world class railway coaches,” he said. He also suggested that once the 160 km speed locomotives manufactured by Medha hit the tracks, entire lifestyle of the daily commuters will change.

Telangana Not regressive
Expressing dissatisfaction over the States that are regressive in limiting employment to natives, Rama Rao reminded them that all States are part of the great country. “In Telangana we are positive in this aspect and the recent State cabinet meeting has decided to encourage firms to provide employment to 60-70 per cent of the local skilled and unskilled youth to avail special benefits. This way the locals benefit from the huge investments arriving through Ts-iPASS,” he said. He said that this way Telangana offers a positive atmosphere for the investors as the skills sets required for companies are not region specific.

He also invited the Medha group to consider entering into the huge Electric Vehicle (EV) market and said that Telangana has recently come up with a EV policy . “You must analyze our policy so that you can come up with ideas to manufacture EV buses, cars two wheelers and even three wheelers,” Rama Rao said. He also called upon the company to adopt Kondakal and Velmal villages under Corporate Social Responsibility and urged the Members of parliament to spend money from MPLADS and establish skill development centres to train local youth under Telangana Academy for Skill and Knowledge (TASK).