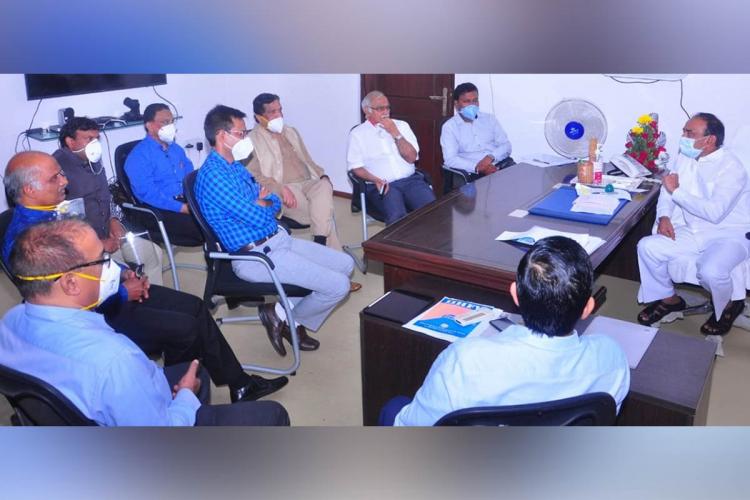 Last evening, a meeting was held between Telangana Health Minister Eatala Rajender and a delegation representing the Super Speciality Private Hospital Association on Thursday. As an outcome of the meeting, private hospitals agreed to hand over 50% of their beds to the state government for treatment of COVID-19 patients as per the tariff fixed by the government.

The health department will allot these beds to patients through a special app and treatment will be provided as per the rates fixed by the department.

The minister thanked the hospitals which came forward to give 50% beds to the government. He asked the management of these hospitals to meet Director of Public Health, Srinivas Rao on Friday, to work out the modalities for treatment of the patients.

Earlier, the High Court while hearing various petitions relating to COVID-19, wanted to know from the government as to what action it had taken against the private hospitals not following its orders with regard to treatment charges.

The court was informed by Chief Secretary Somesh Kumar that complaints were received against 50 private hospitals. Out of 46 hospitals who were served show-cause notices, 16 submitted their replies.

The minister said he had repeatedly appealed to private hospitals to refrain from overcharging during the crisis.

With over 1,000 complaints against private hospitals regarding COVID-19 treatment charges, the minister had directed officials on Monday to prepare plans to take-over 50% of beds and to offer treatment as per government terms.

According to officials, 1,039 complaints were received from people against private hospitals charging exorbitant amounts for COVID-19 treatment.

The state government on June 15 had issued an order announcing the maximum rates chargeable by private hospitals for various services provided by them for COVID-19 treatment. The charges range between Rs 4,000 to Rs 9,000 per day depending on the ward and if ventilator support is provided. However, some charges were excluded like those for costly medicines.

The health minister had directed officials to form a committee to look into the response to the show-cause notices, and to take action against errant hospitals.

As per the bulletin issued by the department on Thursday, 118 private hospitals treating COVID patients had a total of 7,879 beds and out of them 3,426 beds were vacant.
Meanwhile, Chief Secretary Somesh Kumar, who appeared before the High Court through video conferencing, said the state ramped up the number of daily tests and was taking various measures to tackle the situation.

The court expressed its satisfaction on the measures taken by the government.