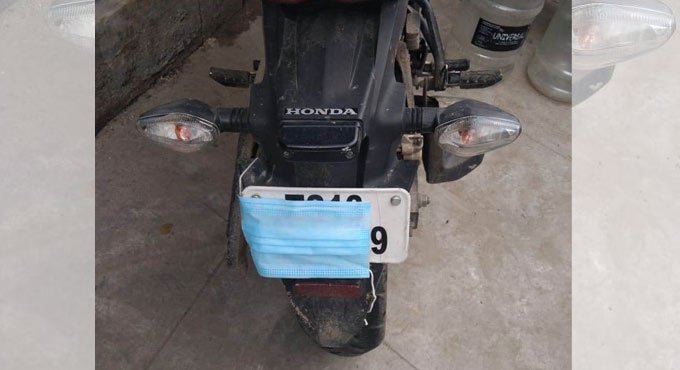 Trust Hyderabadis to come up with innovative ways to escape from cops on the road, whether it is by taking shortcuts to avoid checking or by passing on messages on where cops are. This student from Masab Tank decided to be ‘contemporary’, and used the now ubiquitous face mask to hide his bike’s registration plate.

However, his efforts to avoid his bike from being identified in case he broke traffic laws did not last long, and the Punjagutta traffic police caught Sarfaraz Ahmed Khan, a student from First Lancer near Masab Tank, on charges of hiding the vehicle registration number plate with a face mask.

According to the police, Traffic Sub-inspector P Ramakrishna was conducting a routine checking near A1 Hotel at Punjagutta when he spotted Khan’s bike with its rear plate hidden by the mask.

On being nabbed, the Traffic Police found that Khan had four pending challans worth around Rs.800 as well. The bike was handed to the Punjagutta law and order police who have booked a case against Khan under Section 420 (cheating) r/w 511 (punishment for attempting to commit offences punishable with imprisonment of life) of Indian Penal Code.