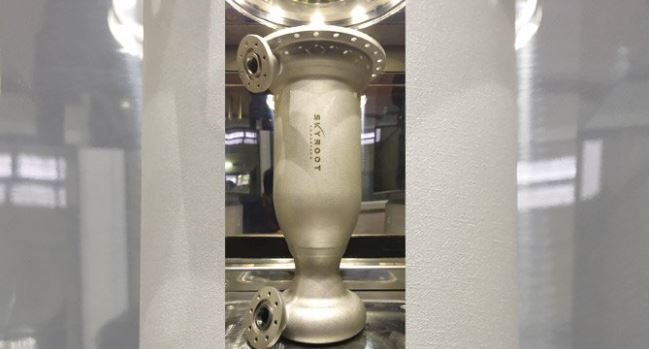 Pawan Kumar Chandana, co-founder and CEO, Skyroot Aerospace said, “This is the first among a series of engines being planned with various thrust levels. We have successfully completed many tests to check the fuel flow and structural integrity. We are building a dedicated test facility for hot fire testing of this engine.”

He added, “LNG (with over 90 per cent methane) is clean burning, low cost, highly reusable and safe cryogenic fuel which is also ideal for longer duration deep-space missions carrying satellites or humans – perfectly aligned with the long-term vision of Skyroot.”

The company has successfully test-fired its upper stage rocket engine named ‘Raman’ on July 30, which can place multiple satellites into orbit, also India’s first. The engine hosts a 100 per cent 3D printed injector, which reduced its overall mass by 50 per cent and reduced the total number of components and lead time by 80 per cent.

Skyroot’s launch vehicle ‘Vikram-I’ which is under manufacturing and targeting launch in December, 2021, hosts an Orbit Adjustment Module (OAM) at the top, which gives the final burn and inserts multiple satellites into space.

The company is working with the Indian Space Research Organisation for testing future rocket engines, which will come up in the next six months. The company is in the process of developing rocket (solid) motors which will be used in three remaining stages of rockets (third, second and first while Raman engine caters to the upper and the fourth stage).

The company has raised Rs 31.5 crore till now and is in the process of raising another Rs 90 crore within one year.