TRS, Congress do enough to halt BJP wave in state 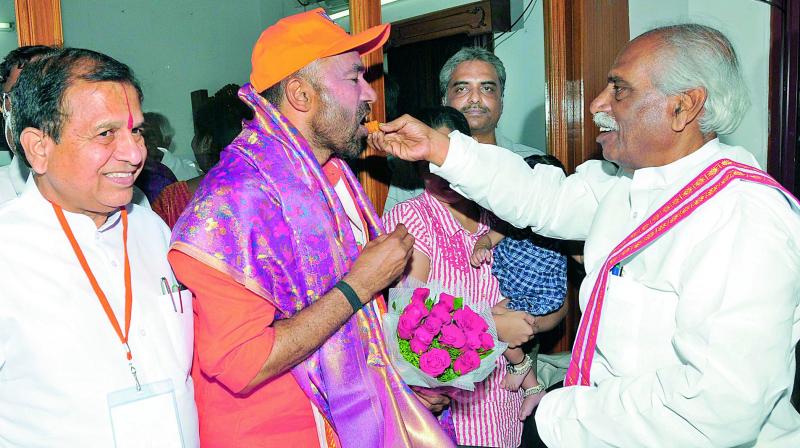 Hyderabad: The Congress put behind its rout in the Assembly elections and won three Lok Sabha seats in the state, against the trend of the people choosing the BJP to oppose the TRS.

Mr Komatireddy Venkata Reddy and Mr A. Revanth Reddy who were defeated in the recent Assembly elections from Nalgonda and Kodangal bounced back with victories in Bhongir and Malkajgiri.

The Congress had a lot of expectations in Chevella, but sitting MP Konda Visweswar Reddy was defeated after a see-saw battle.

It appeared that the voters were choosing the BJP rather than the Congress to express their displeasure to the TRS. The BJP had won only one Assembly seat in December but walked away with four Lok Sabha seats.

The Congress had won 19 Assembly seats but 10 MLAs joined the TRS. A senior politician said the people thought that if they vote for the Congress, the MPs would defect to the TRS. It may not be a coincidence that the three Congress leaders elected are vociferous critics of TRS Chief Minister K. Chandrasekhar Rao.

Mr Uttam Kumar Reddy will have to resign as MLA and it is expected that the seat will go to his wife Padmavathi, who was defeated from Kodad in December.

At another end of the spectrum, the MIM not only retained Hyderabad but also won the Aurangabad Lok Sabha seat. MIM president Asaduddin Owaisi registered his fourth victory from Hyderabad by a margin of 2,82,186 over his BJP rival Dr Bhagavanth Rao. Mr Owaisi secured more votes than in 2014.

There was joy for the party in Aurangabad, where the MM had fielded its sitting legislator Imtiaz Jaleel. He defeated sitting Shiv Sena MP Chandrakant Khaire by 5,187 votes.

In Kishangunj, MIM candidate Akhtarul Iman was in the third position.