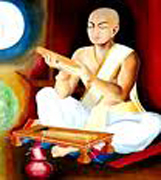 Bammera Potana (1450-1510) was born in Bammera, a village twenty miles away from Warangal, into a Niyogi Brahmin family. His father was Kesanna and his mother was Lakkasanamma. He was considered to be a natural scholar (sahaja panditha) without a teacher. Potana was a very polite gentleman. He was an agriculturist by occupation. Though he was a great scholar, he never hesitated to work in the agricultural fields.

Early Years
At an early age he wrote `Bhogini Dandakam' a poem wrote in praise of king Sri Singa Bhoopala's concubine Bhogini. This was his first poetic venture which had the seeds of his great poetic talents. His second work was "Virabhadhra Vijayamu" which describes the adventures of Lord Virabhadhra, son of Lord Shiva. The main theme was the destruction of a yagna performed in absence of Lord Shiva by Daksha Prajapathi.

As a young man, he was a devotee of Lord Shiva. Later, Potana became a devotee of Lord Rama and more interested in salvation. His conversion from Shaivism to Vaishnavism was triggered by an incident. One early morning during a lunar eclipse, on the banks of river Godavari, Potana was meditating on Lord Shiva. At that auspicious moment, Lord Rama appeared dressed like a king and requested Potana to translate Bhagavatam into Telugu and dedicate it to him. This inspired him to translate Vyasa's Sanskrit Bhagavatam into Telugu.

The king of Warangal, Sarvajna Singa Bhoopala, wanted Potana to dedicate `Andhra Maha Bhagavatamu' to him. But, Potana refused to obey the king's orders and dedicated the Bhagavathamu to Lord Rama, whom he worshipped with great devotion. It is said that Potana remarked, `it is better to dedicate the work to the supreme Lord Vishnu than dedicate it to the mortal kings.' He was of opinion that poetry was a divine gift and it should be utilized for salvation by devoting it to the God.

He was quite fond of using rhythm and repetition of sounds giving a majestic grace to the style of writing. He was very skilful in using alankaras (figures of speech) like similes and metaphors. Potana imparted the knowledge of the divine to the Telugu people along with lessons in ethics and politics through Andhra Maha Bhagavatamu.